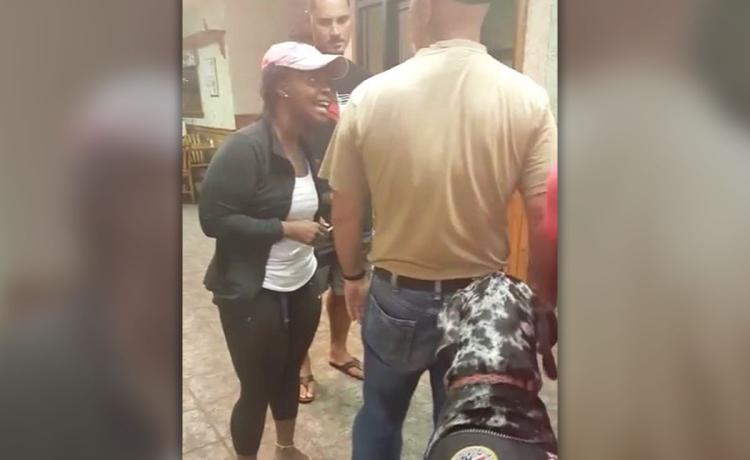 This is truly outrageous and sickening, folks.

I don’t know who the animal is in this one.

An utterly unpleasant woman in a video that has gone viral berates a veteran in public at a restaurant for bringing in his PTSD service dog with him.

Having no respect for a disabled veteran is just the most un-American and classless thing you can do.

The funny thing is, the dog was better behaved than the thing yelling the entire time and having a temper tantrum.

Watch the hideous, disgusting woman in the video below.

In a video that has gone viral, a restaurant patron became enraged when at a military veteran after he brought his PTSD service dog inside a restaurant.

The customer went off, calling the dog, which appears to be a Great Dane, “disgusting” even after she was told the dog was meant to assist the veteran.

The woman said the fact the veteran served did not matter to her because her husband died overseas.

She said in her long-winded, profanity-laced rant that there should be a separate section for people with service animals.

The man accompanying the woman appears embarrassed by her behavior, but does not do much to stop the confrontation.

The woman finally started to leave, only to come back and deliver a message into the camera.

“It’s disgusting to have [an] animal inside of a public restaurant,” she exclaimed.

This man fought to protect us all. I don’t care what he brings when he goes out to eat.

Thank you for your service, hero!

If she doesn’t like the fact that service dogs are perfectly allowed in restaurants, then I suggest that she call up her local representative and lobby for a change in the law, which she won’t get.

This is just seriously a disgusting display of humanity. What a vile creature this woman is.

The left has become out of control.

At least the dog wasn’t the one with the lowest IQ in the room.