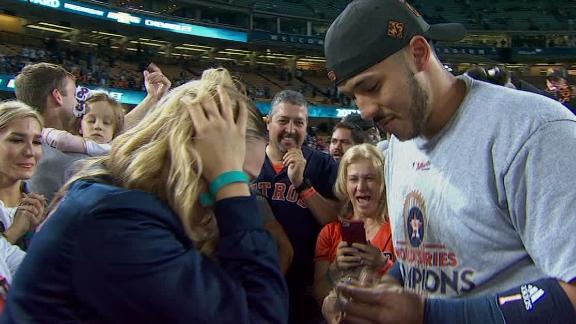 This is a good break from the chaotic scandals plaguing the DNC, HRC, and Hollywood.

Houston Astros player Carlos Correa did not only win the World Series with his team last night, but he also won a “Yes” from his now-fiancée, former Miss Texas Daniella Rodriguez.

That is some move, and some platform for a great proposal!

This is how it’s done, gents.

This is such a great moment for them, and we are glad they shared it with us and the rest of the world. In a video that has gone viral.

Some year for Carlos Correa!

Multiple news and sports outlets have reported on this awesome event, which yes, is taking some of the glory from the winning of the World Series, which is the first in Astros history, but it is well deserved.

Best of luck in your future together, Carlos and Daniella!

DONNA BRAZILE: Hillary Clinton Rigged the DNC, Robbed Bernie Sanders of Nomination
YOU KNOW NOTHING: ‘Game of Thrones’ Actor Who Plays Jon Snow Forced to Apologize for Claiming Men Can Be Victims of Sexism