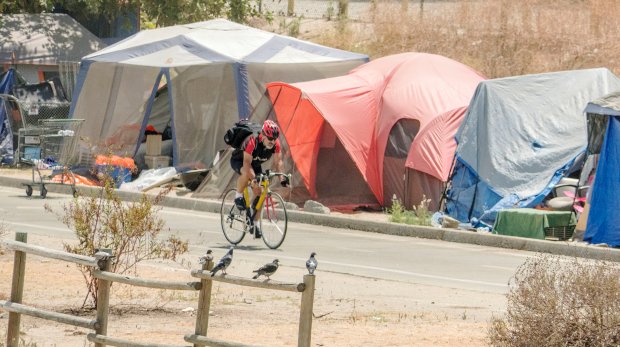 …or maybe you will. I, for one, did not find this surprising.

This is what you get when you elect globalist, anti-American scumbags that are out for control and keeping the public rooted in chaos and poverty.

This is California. This is Orange County.

A cyclist filmed 10 straight minutes of tent towns while riding along a street in Orange Country, California, right next to mansions, which can be seen in the background.

Show me a devastated slum, and I will show you over 40 years of Democrat “leadership.”


Stop electing these fools. Thanks to the radical leftists running California, it is an unsustainable state, and is the poorest in the nation, despite having the largest economy.

That is what the Democrats deliver. Poverty, crime, and chaos, in order to divide and conquer.

Watch the great state of California below:

This is in SANTA ANA. How despicable.

This is what liberal laws will produce, everywhere they are implemented.

According to the Conservative Tribune:

If there’s any one state in this august union that could be properly termed socialist, California would certainly be in the running.

After all, the Golden State is where taxes are high, the so-called “safety net” is wide, economic growth is low and anyone who disagrees with leftist orthodoxy is chased off of state-run college campuses.

Well, if you want to call California socialist, all we can say is this: We’ve seen the future, and it doesn’t work.

If you don’t believe me, take a look at this video showing the homelessness in Orange County, California. It’s a 10-minute bike ride through one of the largest shantytowns in America.

The encampment in question is along the Santa Ana River right by Angel Stadium.

According to the Los Angeles Times, authorities decided to shut down the encampment last November, although we wish them good luck with that.

This is just one of many shantytowns coming up by the minute in the disaster known as liberal California.

Share this to expose the real results the Democrats deliver. This is socialism at work.