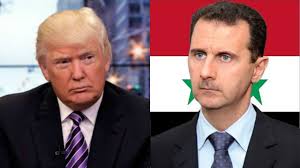 There are reports surfacing of new gas attacks by the Syrian Government on its own people.

Cell phone video from Syria is circulating on social media and various internet sites, and Fox and Friends reported on the incident this morning.

If this is truly a chemical weapons attack carried out by the Syrian Government led by dictator Bashar Al Assad, this will put President Trump in a very tough bind of a situation.

We know how spineless Obama reacted to the chemical attack of 2013. He did nothing.


What will President Trump do to respond to these war crimes if proven to be true?

Watch the video below from Fox and Friends, in an interview with US Army Special Forces Veteran Jim Hanson.

"If this is confirmed as an attack by the Syrian army using chemical weapons it puts President Trump in a difficult position." – US Army Vet Jim Hanson

What do you think of all this?

I say enough is enough. Assad must go, but we need to have a military plan for stability in the region until the void is filled with a pro-American leader.

You can’t spell Assad without ASS.