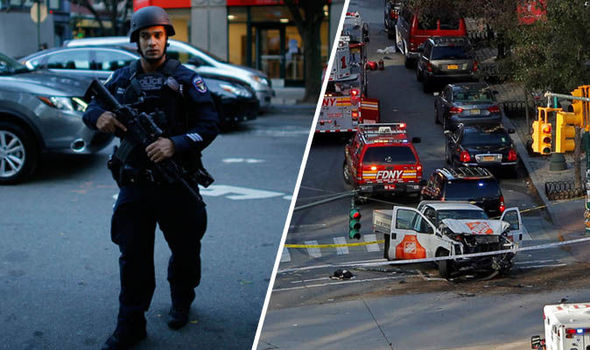 At least eight people are now confirmed to be dead as a radical Islamic terrorist shouted “Allahu Akbar” as he rammed a pickup truck through a Lower Manhattan crowd this afternoon. At least another 11 people were confirmed injured.

And liberals like De Blasio and Schumer want MORE of these people to come to our country?

Islam is incompatible with Western ideals, and Sharia law cannot coexist with the constitution. So what the hell are we doing here?

Radical Muslims will not stop the killing and the violence. It is a part of their religion. The Qur’an also contains the book of law, making it a fascist cult protected and disguised as a religion. It is not.


This is not a sick-minded, deranged individual, ladies and gentleman. This is calculated, pre-meditated Islamic Terrorism. Convert or die. Death to the West. Death to America. Sound familiar? They preach it in their mosques.

At least eight people are dead after a driver barreled into a bike path and crashed a rental pickup truck into a crowd in Lower Manhattan Tuesday afternoon, shouting “Allahu Akbar,” law enforcement sources tell Fox News and The Associated Press.

Another 11 people were injuried, officials said. The 29-year-old driver was shot by police after he jumped out of his Home Depot rental truck carrying what turned out to be two fake handguns.

Mayor Bill de Blasio, speaking at a press conference Tuesday evening, called the incident “an act of terror.” Governor Andrew Cuomo said that at this point in the investigation, there is no evidence to suggest that there was a wider plot.

FBI officials confirmed to Fox News that they have agents responding to the situation “with NYPD.” A bomb squad is also on scene examining a vehicle.

Following the incident in New York, President Trump tweeted“looks like another attack by a very sick and deranged person. Law enforcement is following this closely. NOT IN THE U.S.A.!”

One witness who passed the scene while on the West Side Highway said he saw several peple bleeding on the ground and a truck hit several people. Another witness told The Associated Press the truck had collided with a small bus and another vehicle.

A school photographer nearby said he peeked around the corner, where he saw a thin man in a blue track suit running and holding a gun. He claimed he saw a heavier man chasing after him.

Blood is on the hands of liberals like Obama and De Blasio.

This will keep happening in cities near you until we all wake up and realize that this is the ultimate goal of these radicals, and that they are not here to contribute or coexist but to terrorize and to kill.

Stay tuned, as this is a developing story.

MORE WINNING: RIP ESPN: Disastrous October Numbers Show Nearly HALF A MILLION Subscribers Lost
WE NEED TO WAKE UP: The Truth About Saifullah Saipov and Radical Islamic Terrorists Like Him