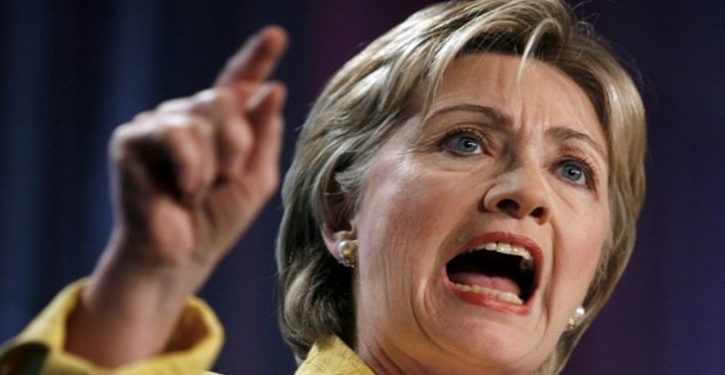 We knew she was delusional, but this is just… wow.

Failed presidential candidate Hillary Clinton is not done throwing tantrums, with the latest aimed at the Republican party.

Hillary, despite the scandals with Uranium One, the IRS, the emails, Hollywood, Benghazi, and other turmoil plaguing both the Democratic party and the DNC, thinks the Republican party is the one that is ‘imploding.’

How backwards is that?

To deflect attention off of the atrocities linked to her, her husband and their disgraced Clinton Foundation, she is mudslinging blindly and lashing out in Kindergarten-like fashion. How desperate.

Watch her in action:

How out-of-touch can you be?

She should be focused more on learning from her epic string of failures as a Secretary of State, then as a Presidential Candidate. She should also be focusing on fixing the issues plaguing her organization and party instead of worrying about a strong, debating Republican party that has a clear movement and message, poised to rebuild and become even stronger as Democrats continue to implement the anti-Trump anti-America approach.

Doomed Presidential candidate Hillary Clinton lashed-out at the Republican Party on Wednesday, saying the GOP was “imploding” and had become “captive” to the far-right and “religious” zealots.

Clinton was speaking during a press event focused on her new memoir when she made the outlandish claim, ripping the GOP for being at the “mercy of their financial backers.”

“We’ve seen in the last week, we’ve seen Bob Corker, we’ve seen Jeff Flake, there are a lot of people in the Republican Party who feel exactly same way,” said Hillary. “When they appear on TV or they are interviewed they need to be pressed on how they feel and what they think.”

“There are a lot of things that I worry about, this is actually on my list of what I worry about,” she added. “The Republican Party is imploding. It is becoming a far-right captive party to ideological, religious, and commercial interests.”

“It is at the mercy of its financial backers and a cabal of leaders who are doing things like shrinking the electorate, gerrymandering, and taking every step they can to maintain power on behalf of themselves and those who are like-minded,” she added.

Share if you agree that she is delusional and unfit to lead.