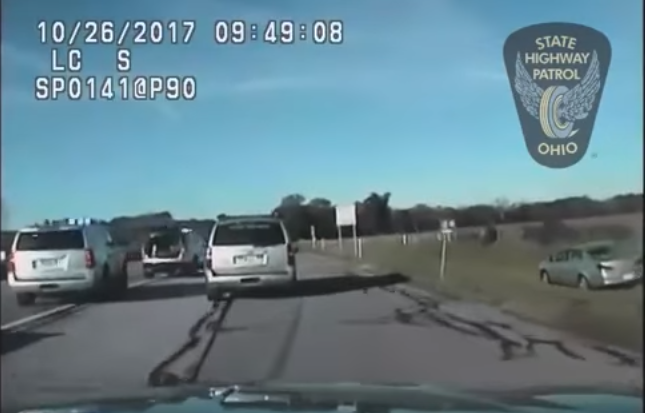 Talk about a problem child, folks.

This monster spat in the officers’ faces, punched them, and kicked them as they were arresting him.

And he is only ten.

According to the Ohio State Highway Patrol in Cleveland, this was this kid’s second joyride in as many weeks.

Where are the parents in this picture?

The parents need to be locked up, and this kid needs some serious help.


The boy from the Cleveland, Ohio area led state highway patrol officers in Ohio on a wild high speed chase at over 100 miles per hour at times, for over 45 miles.

This child is clearly out of control, and needs serious help.

A 10-year-old Ohio boy didn’t spend his Thursday morning in school, or at home playing video games. Instead, he led highway patrol officers on a high-speed car chase reaching speeds of almost 100 miles per hour.

The joyride — which lasted less than an hour — was the boy’s second in two weeks, according to Cleveland police.

A man dialed 911 after he saw a 2004 Toyota Avalon swerving across Interstate 90 west. Westlake police officers spotted a speeding car being chased by another vehicle, possible driven by the boy’s mother.

Three Westlake officers followed the boy for more than 15 miles — with speeds reaching 100 mph — before he drove through a toll booth and entered the Ohio Turnpike.

That’s when at least four Ohio Highway Patrol troopers joined in on the chase and attempted a rolling roadblock as the boy drove erratically along the turnpike, with the troopers close behind for close to 20 miles.

The boy eventually slowed down and drove onto a berm to avoid driving over stop sticks. One trooper then nudged the boy’s car at a slow speed into a mile post sign, and another state vehicle blocked the boy’s car, preventing him from re-entering the road.

“It was very lucky no one was hurt,” Highway Patrol Sergeant Tim Hoffman told The Associated Press.

When the child was taken into custody, he attempted to spit in the troopers’ faces and even kicked one of them in the chin, WEWS reported.

The boy was taken to a hospital by a legal guardian, and will be placed in the custody of Erie County Children’s Services before being evaluated. Ohio Highway Patrol said it will confer with the Erie County Prosecutor’s Office about criminal charges.

The boy said he decided to take the family car out because he was bored, according to WEWS.

How outrageous is that?

And I thought I was bad as a kid.

His parents should be held accountable as well for this. The child’s behavior both before and after being caught is absolutely unacceptable. Shame on them.

Respect and discipline are non-existent in this family. This is thug behavior at ten years old. This child is set up for wasting his entire life because he doesn’t have a support system at home.

Also, the article states that the cate he was driving was being pursued by another car “possibly driven by his mother.” What in the name of the good Lord happened to her? Did she stop following her belligerent son when the cops stepped in? There is no mention whatsoever of her being present during her son’s arrest…

This is just bizarre.