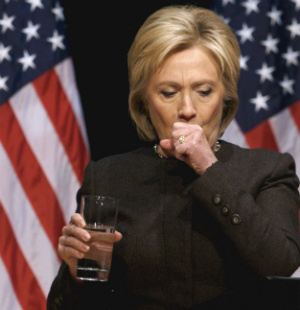 The failing book tour is failing on even more fronts now.

Another Hillary Clinton health issue is being covered up by the liberal mob, better known as the fake news mainstream media, as we speak.

Hillary Clinton, the failed presidential candidate who is recounting her failure in the form of a book tour, collapsed while on a visit to the United Kingdom, and was forced to cancel many events throughout the country, some being cancelled mere minutes before she was supposed to appear and speak.

Of course, the liberal media rushed to report that Hillary simply “fell over” and injured her foot, but we the people know better, as we saw the collapses and health concerns firsthand during the 2016 presidential campaign.

Hillary is currently getting some much needed medical attention, and will reportedly have x-rays done on Monday to determine whether she is fit to continue with her book tour, or if she should cancel all upcoming tour events.

This news comes just as we are hearing about tensions escalating within the Clinton family, as it has been reported that Bill and Hillary are not on speaking terms based on a feud over her book of excuses.


What a sad family.

Former Secretary of State Hillary Clinton reportedly “fell over” and hurt her foot while visiting the United Kingdom as part of her ‘What Happened’ book tour, cancelling events throughout the country minutes before she was scheduled to appear.

According to the Daily Mail, the doomed democratic nominee cancelled speaking engagements after sources close to Clinton say she collapsed after speaking at the South Bank Centre, injuring her foot and appearing “exhausted” following an intense travel schedule.

Philip Schofield, host of the UK’s ‘This Morning’ posted the cancellation on social media, saying “Supposed to be interviewing Hillary Clinton… but she’s fallen over and hurt her foot!! Gutted.”

The former First Lady is currently receiving medical attention, and is expected to receive an x-ray Monday afternoon to determine if she should continue her book tour or cancel all future events.

Clinton’s health became an issue during the 2016 presidential race after the democratic nominee collapsed during a 9/11 memorial event in New York City; being rushed to her daughter’s apartment after suffering from “heat exhaustion.”

There is definitely a concerning pattern of health issues that cannot be ignored.