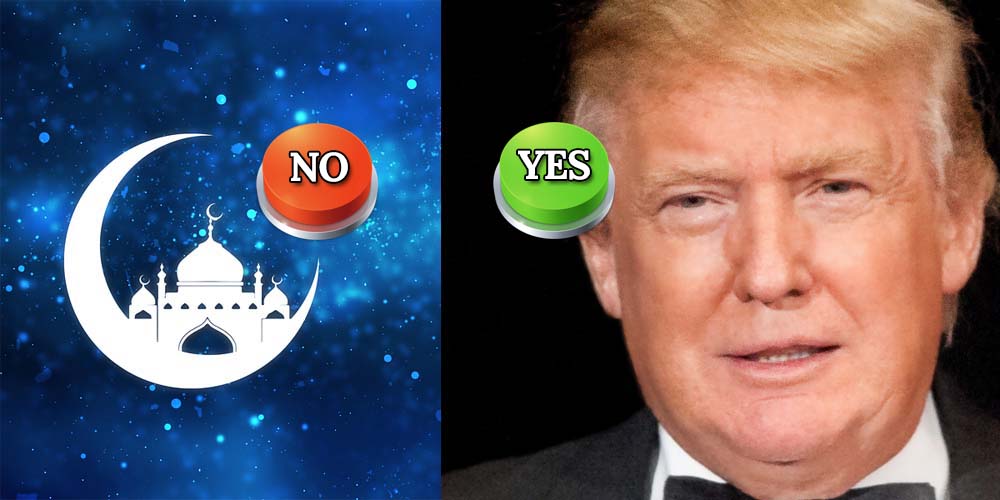 [Scroll down and vote]

President Trump has decided not to host an end of Ramadan celebration in the White House. Obviously many white Liberals are angered by this and see it as a sign of Islamophobia and are being cheered on by a complicit MSM. But the reality is that outside of the MSM, special interest groups and idiots, no one really cares that there is not an Eid-a-Fitr at the White House. Trump is not a Muslim, the country is not a Muslim country, and although many Americans respect the contributions made by Muslim people to the nation…Ramadan has nothing to do with the US as a nation.

Liberals are proclaiming that Thomas Jefferson hosted the first Fitr in 1805; in some way they have convinced themselves that because a President did something many years ago it is automatically an American values issue…many years ago, some Presidents supported slavery; are they suggesting that Trump do the same?

Many nations and cultures have supported and given benefit to America (for the most part by the process of themselves becoming America), but that does not mean that all festivals from all countries and cultures should be celebrated. We can all openly admire the contributions of the Dutch in the building of America, yet we do not celebrate the Dutch King’s birthday which is a national holiday in Holland (Apr. 27th). Nor did Trump give special treatment to other religion’s celebrations with official parties…Such as the Jewish Seder Passover, that did have an event at the White House but was not attended by Trump or his Jewish family members.

As reported on ABC News:

For the first time in over two decades, the White House did not host an Iftar or Eid celebration dinner to mark the month of Ramadan, the Islamic holy month when Muslims fast during daylight hours.

Hosting an Eid celebration or an Iftar dinner – the nightly meal when Muslims break their fast during Ramadan — had been a White House tradition since 1996, when then-first lady Hillary Clinton hosted the first Eid dinner there. Iftar dinners inviting prominent members of the Muslim community to break their fast at the White House were continued each year during the administrations of both President Bush and President Obama.

Secretary of State Rex Tillerson also broke with tradition by not hosting an Iftar dinner at the State Department during Ramadan, as has happened for the past two decades.

Most Muslims in America do not care if the White House celebrates Eid. It is a Muslim festival and neither Trump nor his family is Muslims. They do not see it as a mark of disrespect any more than the Welsh see the lack of celebration by other nations on St. David’s Day as disrespect. It is irrelevant to them.


The only people who do care are the ones determined to make political capital out o any event that can possibly cast Trump in a bad light. But even they do not care about a slight against Muslims…Only what they can personally benefit from.

Fascist California Travel ban Applied To 4 More States – Where is the Democrat OUTRAGE?
Liberal Professor Is Most Vicious and Sickest Ever! Read Her Foul Comments