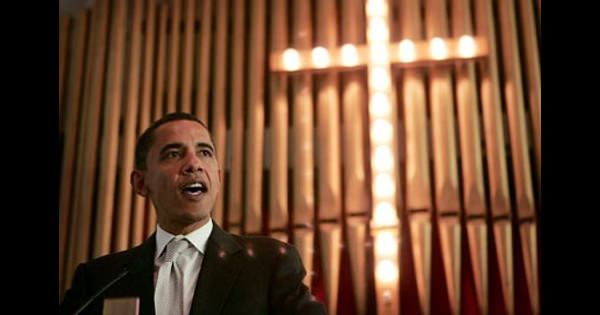 So this is the man that the Godless leftists so worship and look up to!

President Donald Trump used some pretty foul language at some point in his life as a lot of flawed people, even Christians, do at some point in their lives also, but let me tell you this person is no Christian in any way shape or form and this is the kind of person many of you seem to want to release into your children and grandchildren’s lives.

I pray you take stock of your spiritual lives and souls before it is too late!! Trump is only human, but yes I believe he is closer to knowing Christ than any of you give him credit for!

According to Conservative Fighters:

Barack Obama is the epitome of a godless Leftist. His presidency–which nearly ruined this country–showcases the morally bankrupt ideology of a radical movement that has complete disdain for Christianity.

Of course, the media doesn’t want Americans to know how anti-Christian Obama is. That’s why they’ve tried their best to conceal this revealing video, in which Obama shamefully mocks the Bible and Jesus Christ himself. SICK!

Just listen to how he painted the Bible. By taking these passages out of context, Obama wanted to depict Biblical teachings at backward, barbaric, and evil. It’s the standard Leftist tactic of discrediting Christ’s teachings.

Can you believe he even had the nerve to insult the Sermon on the Mount? Obama has no sense of decency whatsoever! He disrespects what is widely considered the greatest religious sermon ever delivered!

We all knew Obama was bad news, but many didn’t know he was willing to sink to these depths–blaspheming in front of a live audience! And the worst part is the people there cheered! The devil certainly has his disciples!

Watch the disgusting comments by Obama in the video below:

This all but proves that he was a lying Muslim pretending to be a Christian just to get elected. Everything about him and his appeal was fabricated by George Soros and his anti-American NGOs.

Well, the Bible says, there will be mockers of his word. It also says, when the Son of man returns every knee shall Bow and every tongue will Confess that Jesus Christ is Lord. Obama and his cronies can mock all they want for they shall face The fires of Hell for their evil deeds.

He is a hater of America, He became president to steal secret information and share with our enemies.

He hired so many radical Islamists from the Muslim Brotherhood to be in charge of classified information.

The Dems and the liberal media should by now knowledge that this guy was a Kenyan Muslim not an American Patriot.

Someday, Barack will stand before Almighty God, not Allah, and give an account of his life! I am by no means perfect, but I would not want to be in his shoes!