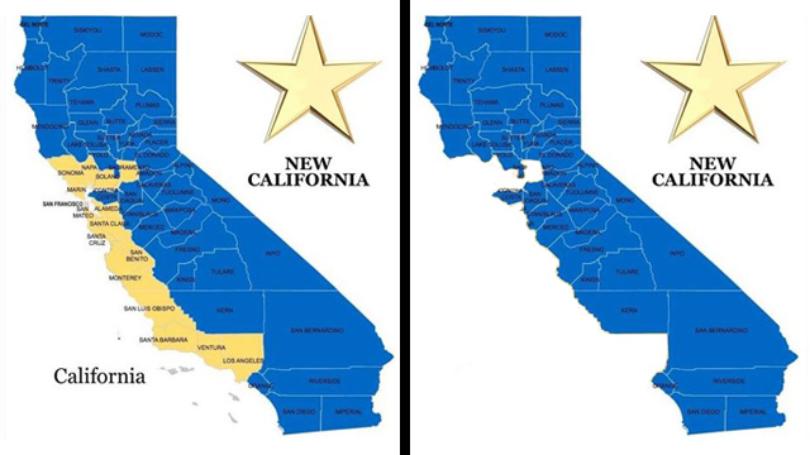 While far-fetched, this idea is simply fantastic.

Two men have launched a movement aimed at seceding from the state of California, effectively splitting the state into two: the rural East, and the urban coast.

Sanctuary laws in the ultra-liberal Progressiveland of California have not only made it the poorest state in the nation despite having the largest economy, but it is simply ungovernable at this point.

This solution would allow the liberals to marry their toasters while taxing themselves to death, and would simultaneously allow the law abiding citizens of California to become free of the anti-American agenda plaguing their state.

This would also split up the state’s electoral votes, giving the left much less of an advantage off the bat in general elections.

California has become an invaded state: over 6 million illegals costing the state billions of dollars a year, as well as the 6 million others that were legalized in the 80s via amnesty. All of these unproductive foreigners invaded the coast, turning the biggest red state into the deepest blue state.


On top of that, DACA, which I call “Democrats Against Children of America,” would further the social engineering of the electorate in several states, and encourage millions of additional illegals to flood over our borders and continue the cycle.

Enough is enough, and the two men who started this movement realize just that.

Two men have launched a campaign to divide rural California from the coastal cities, motivated by what they referred to as a “tyrannical form of government” that doesn’t follow the U.S. Constitution or the state one, the San Francisco Chronicle reported.

Unlike the failed 2016 campaign to split California into six states, the “New California” movement, founded by Robert Paul Preston and Tom Reed, seeks to consolidate rural California into a distinct economy separate from the coast.

“After years of over taxation, regulation, and mono party politics the State of California and many of its 58 Counties have become ungovernable,” the movement declares on its website.

Preston and Reed say the citizens of the state live “under a tyrannical form of government that does not follow” constitutional requirements.

“There’s something wrong when you have a rural county such as this one, and you go down to Orange County which is mostly urban, and it has the same set of problems, and it happens because of how the state is being governed and taxed,” Preston told CBS Sacramento.

The “founders” have evoked Article IV Section 3 of the U.S. Constitution as justification for establishing a new economy with a new state constitution.

It states that a consensus must be reached by the state legislatures of California as well as Congress. The process, according to New California representatives, could take 10 to 18 months.

What do you think? Do you agree with this movement and solution? Does it have a chance?

SEE ALSO:  In A Choice Between Bringing Down Trump Or Protecting Her Money - Guess Which Maxine Waters Just Chose?

Let us know in the comments on social media!