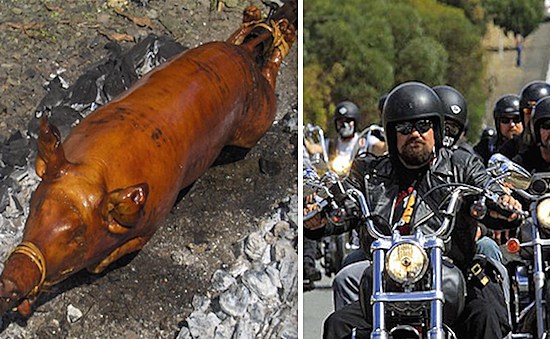 Via Red People US:

A chapter of The Infidel Biker Club in El Paso is hosting a massive pig roast entitled: In Defiance of the Islamic Holiday Ramadan and will have an “anti-Islam” theme. The biker group predict about 150 people will turn up for the event and the Sheriff’s office will be monitoring it to “make sure the community is safe”.

Liberties in the US are protected by our Constitution, and arguably the most significant is Freedom of Speech. Once folks attempt to “qualify” freedom of speech, they propose that it doesn’t indicate the right to offend…Newsflash: it does! Being offended comes in many sizes and shapes, and it is purely subjective…We can’t and mustn’t police free speech to stop snowflakes from feeling offended.

The Infidel biker group are obviously attempting to make a clear, bold statement. They aren’t simply trying to annoy Muslims, but are protesting in a manner as real and valid as any other. They are protesting the fact that Islam is given a higher priority than other beliefs or groups in our country, and this is their way of displaying that America is still a free country despite liberals attempting to strip us of our freedoms.

Agree or disagree as you may, it’s their absolute right to host a BBQ and call it whatever they wish to call it. This is still a nation that protects its citizen’s rights, and with folks like the Infidel Club around, it’s likely to continue to be for quite a while!

Approximately 150 attendees are expected at the event, the El Paso County Sherrif’s office confirmed before the weekend.


The local Sheriff’s office plans to monitor the event – called “In Defiance of the Islamic Holiday of Ramadan,” “to make sure the community is safe.”

A Sheriff’s office superior who communicated with the event’s organizers learned late Friday that the roast would proceed as planned, she said.

The event is being put on by the Colorado Springs chapter of the Infidels Motorcycle Club, which is made up of veterans, and is being held at its headquarters northwest of Peterson Air Force base in the Cimarron Hills area. Kirby said the Sheriff’s Office has had no previous calls for service at the warehouse location where the club has held other events.

Although Kirby said the Sheriff’s Office does not anticipate problems, the pig roast is being held about two months after a well-publicized contest for cartoon depictions of the prophet Muhammad drew two armed Islamic State group sympathizers to the exhibit in a Dallas suburb. Police shot the two men dead.

A notice from the Sheriff’s Office to its deputies said military police found copies of a flier promoting the barbecue posted around Fort Carson in an attempt to “negatively” impact Muslim military members and their families who are observing Ramadan. The fliers were immediately taken down, the notice said.

“Fort Carson is investigating the posting of fliers at a single location on post about the Infidels MC club and cannot discuss any specifics in regards to the investigation,” post officials said Friday. “These types of fliers are contrary to our Army values and beliefs in dignity and respect for all.

“The command expects every individual to contribute to a culture in which our soldiers, civilians and family members can reach their full potential with infinite dignity and worth.”

A flier obtained by The Gazette says the Colorado Springs chapter of the Infidels Motorcycle Club is hosting an “open bike party” and “pig roast” – titled “In Defiance of the Islamic Holiday of Ramadan” – at the group’s headquarters northwest of Peterson Air Force base in the Cimarron Hills area.

The motorcycle club consists almost entirely of veterans, according to its website.