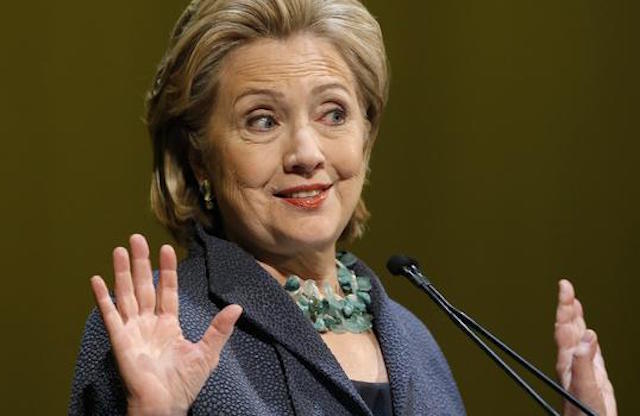 Hillary Clinton, failed presidential candidate and disgraced former Secretary of State, claimed just last week that the allegations against her concerning the approval of the sale of a uranium production company to Russia for donations to the controversial and scandal-plagued Clinton Foundation have been debunked.

The lie detectors have determined that is a lie.

With investigations ongoing, Clinton couldn’t be farther from the truth in her attempts to deceive the public.

New reporting has come out not only confirming that the investigation into the matter is widening, but also that there is a rise in reasonable and valid concerns over glaring conflicts of interests regarding the Clinton Foundation.

So what are they hiding?


According to the Daily Caller:

Former Secretary of State Hillary Clinton claimed last week that allegations that she approved the sale of a uranium production company to Russia in exchange for donations to the Clinton Foundation have been “debunked.”

The Clinton family’s longstanding ties to the uranium company in question have received serious scrutiny by news outlets across the ideological spectrum. Allegations of a quid pro quo are unsubstantiated, but in light of new reportingcritics continue to raise reasonable concerns over conflicts of interest and a lack of transparency from the Clinton Foundation.

Allegations of corruption between Clinton and Uranium One investors gained renewed interest last week after The Hill reported that the FBI was investigating Russian efforts to take control of nuclear power interests in the U.S. through bribery, money laundering and other corrupt means before the uranium deal was approved.

“The Russians were compromising American contractors in the nuclear industry with kickbacks and extortion threats, all of which raised legitimate national security concerns,” one source told The Hill.

Clinton was asked about the allegations during an interview on C-SPAN after President Donald Trump and conservative pundits brought the Uranium One scandal back to national attention.

“It’s the same baloney they’ve been peddling for years, and there’s been no credible evidence by anyone,” Clinton responded. “In fact, it’s been debunked – repeatedly – and will continue to be debunked.”

Many conservatives have alleged the donations were part of a more elaborate pay-to-play scheme devised by the Clinton family, a claim Trump advanced during the 2016 presidential election. For this reason, Clinton argued the allegations are nothing more than a political distraction.

But donations to the Clinton Foundation by Uranium One investors have been scrutinized and even criticized by left-leaning news organizations. As The Guardian noted, “Such awkward collisions between Bill’s fundraising activities and Hillary’s public service have raised concerns not just among those who might be dismissed as part of a vast rightwing conspiracy.”

The New York Times has investigated the donations extensively since 2007. Its reporting describes a close, mutually-beneficial relationship between the Clinton family and Frank Giustra, a businessman and founder of the company that would later become Uranium One.

Giustra went from a virtually unknown figure in uranium mining to a major industry player in 2005 after he secured lucrative uranium rights in Kazakhstan, days after traveling to the country accompanied by former President Bill Clinton.

“What his fledgling company lacked in experience, it made up for in connections,” writes the Times.

Giustra donated $31.3 million to the Clinton Foundation several months after the visit to Kazakhstan, which the Times characterized as a “windfall” for the charitable organization.

The Clinton Foundation had repeatedly insisted that the $31.3 million line item on its tax return was the sum total of smaller contributions, but the Times found there was only a single donor – Giustra.

The Times also discovered $2.4 million in undisclosed donations by Ian Telfer, the chairman of Uranium One, despite a pledge by Clinton to publicly disclose all Foundation donors while serving as secretary of state. The Times editorial board called the omission “an inexcusable violation of her pledge.”

The Times scrutinized other transactions as well, including a $500,000 speaking fee paid to former President Clinton by a Russian bank promoting Uranium One stock. The speech took place shortly after Russia announced its intention to buy a majority stake in the company, a move that would require approval by Secretary Clinton’s state department.

The same Times editorial board that endorsed Clinton for president last year also admonished her in 2015 for the appearance of impropriety, citing dealingswith Uranium One in particular.

The lack of transparency and conflicts of interest reported by the Times were widely covered by outlets like NPR, Slate and MSNBC. The Washington Post wrote its own investigative piece in 2015 examining the Clinton-Giustra relationship, and back in 2008, a WaPo op-ed remarked how “the appearance of a conflict is unavoidable.”

Allegations began to circulate again last week after The Hill reported that Russian nuclear officials sought to financially benefit the Clinton Foundation and that former President Clinton had planned to meet with a key Russian official around the time of the deal. In addition, The Hill reported that the Justice Department allegedly prevented an FBI informant from disclosing Russian nuclear corruption to members of Congress.

Despite the suspect nature of the dealings, there’s no hard evidence of quid pro quo between Secretary Clinton and Uranium One investors. The Clinton Foundation has repeatedly denied allegations of wrongdoing.

The only things I see that have been debunked thus far are the fake news reports that Hillary had a 93% chance of winning the presidency in 2016, among many other fake news reports by Clinton-backed MSM outlets.

The investigation needs to include Comey and Lynch. They should also be held accountable for their actions, or lack thereof, regarding these matters while they were in charge.

Share if you agree, and comment on the situation below and on social media! We would love to hear what you have to say about the leftist corruption!