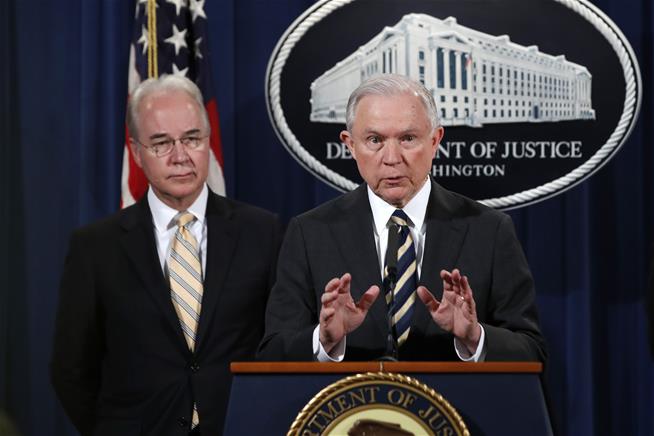 Sessions said that the bust accounted for $1.3 billion dollars in fraudulent transactions across several states, and that there were at least 20 who are accused of overprescribing opioids.

“Too many trusted medical professionals…have chosen to violate their oaths and put greed ahead of their patients,” Sessions said. “Amazingly, some have made their practices into multi-million dollar criminal enterprises.”

America is suffering at the hands of opioids. People get hurt at work and in a lot of cases get hooked. Sadly, there was an estimated 59,000 overdoses last year. Many of those overdoses were due to opioid dependencies.  The worst part is that this year we are on track for over 60,000 casualties.

Just an example, a clinic in Houston is accused of writing TWELVE THOUSAND prescriptions. Which was enough for TWO MILLION illegal doses.


In addition, Acting Director Andrew McCabe said, “The nation is in the midst of a crisis,” McCabe said. “Opioid abuse destroys lives.”

He continued on saying, “These people, inflicted a special kind of damage.” Referring to the medical professionals who just prescribe opioids willy-nilly showing little regard to the long term effects of this kind of practice.

Moreover, this bust should open the eyes to the thousands of other medical professionals who have turned their medical practice into a multi-million dollar drug operations. When we look to opioid addiction many turn and say that it is the fault of the user. They leave out the fact that doctors across the United States have used their businesses to create dependency.

In closing to the largest healthcare bust:

This may be the largest healthcare bust, but this is something that should have happened over a decade ago. This problem is one that has been here for decades and in many cases ignored and/or considered unimportant. Finally, we have an administration that has put the lives and the overall welfare of American’s at the top of their to-do list.

Furthermore, this shows that this is an administration of ACTION. The President may be a little bullheaded at times; but, he is proving time after time that he and everyone apart of his administration are about action.

Don Jnr. Was A STING OPERATION – Russian Lawyer Was Meeting With Obama All Along!
WATCH: CNN Anchor Fails to Recognize Star Spangled Banner on Live TV