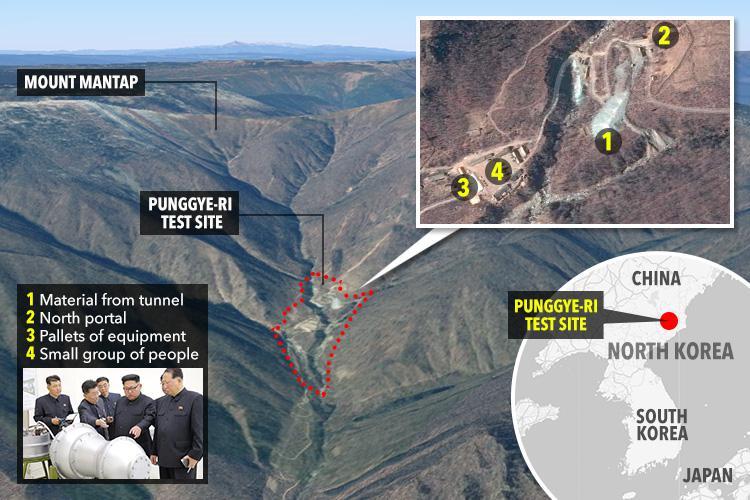 The idiot in North Korea just rendered a large portion of his country a nuclear disaster.

A nuclear facility’s tunnel, dug under a mountainous terrain and which serves as a notorious site for Bowl Cut Jr.’s nuclear tests, has collapsed, reports confirm.

The disaster has led to over 200 deaths, including 100 in the first cave-in alone, and scores more as various parts of the facility gave way, burying both scientists and responders to the disaster.

Officials from neighboring countries, including Japan and South Korea, warn and fear that the collapse could release nuclear contaminants and harmful radiation throughout the entire region.

This is what happens when you let an evil crazy dictator run the show. It is about time we take care of this insane kid before more disasters on larger scales happen.

Hundreds of North Koreans are feared dead after one of Kim Jong Un’s nuclear test sites collapsed earlier this month; killing 100 in the initial cave-in and dozens more as other parts of the facility gave-way on top of rescuers and scientists.

According to Fox News, the cave-in occurred at the Punggye-ri nuclear testing facility in the communist nation’s north-east coast. The collapse may be the result of Kim’s hydrogen bomb test, which triggered a 6.1 magnitude earthquake and severely damaged the underground tunnels used to contain nuclear radiation from the surface.

South Korean and Japanese officials fear the possible collapse could release radiation and other nuclear contaminants throughout the region. Last month, radioactive elements common in nuclear tests were detected in various parts of South Korea, including the capital.

Chinese officials warned the collapse could “take the roof off” of Kim’s recent hydrogen nuclear detonation, adding the fallout could reach as far as the west coast of the United States.

“A 100 kiloton bomb is a relatively large bomb. The North Korean government should stop the tests as they pose a huge threat not only to North Korea but to other countries, especially China,” he added.

This is complete insanity, folks.

We should not tolerate reckless acts at this scale by world leaders who do nothing but spread fear, terror and evil throughout their region and the world.

Sponsored Links
SEE ALSO:  Another Democrat in trouble: Texan indicted for investment Ponzi Scheme, and could face 200 years in prison

This disaster should be the tipping point that sets the leaders of the free world, specifically our President Trump, in motion to bring down the regime of this insane freak destroying the Korean Peninsula.