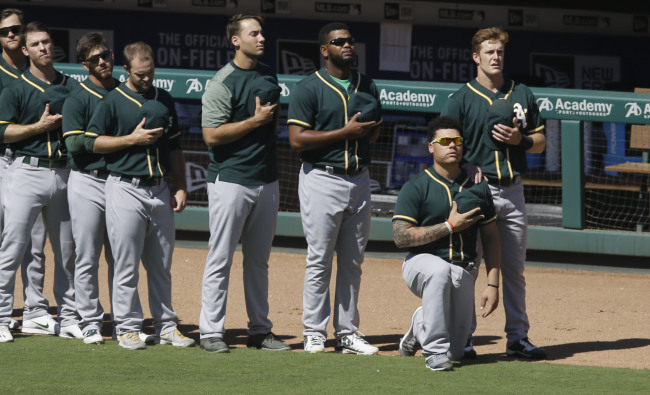 You know what they say about karma?

I’ll just leave that there.

Entitled MLB brat Bruce Maxwell of the Oakland A’s was the only Major League Baseball player to take a knee during the playing of the National Anthem.

This enrages many fans and everyday Americans who respect their nation and what it stands for.

Well, one restaurant in Alabama served up a dish of karma instead of the player’s request for a meal, and it was all due to the baseless whiny protesting.

Maxwell actually kept up the whining and complaining, speaking to TMZ about the incident:


I got racially profiled in my hometown the day I got home. I wasn’t even home four hours and I got denied service at lunch with our city councilman who is also an African American guy I went to high school with because the dude recognized me as the guy who took a knee and he voted for Trump and was at that Trump rally in Huntsville, Alabama.

And so he denied us service at lunch and they had to go get us another waiter to wait on our table in that same restaurant.

Your freedom of speech is just as good as the crew of the Alabama restaurant, brat.

If you can feel entitled enough and disrespectful enough to choose your ego and a baseless protest over respect for the men and women of this country who died for your freedom and safety, so can the Alabama restaurant crew.

Plus, newsflash, it isn’t racial profiling when the dude knew exactly who you are.

He wasn’t refused service because he is African American. He was denied because he is a rich, overpaid, privileged brat who thinks that somehow disrespecting his country, his Anthem, his flag and his President constitutes an appropriate protest!