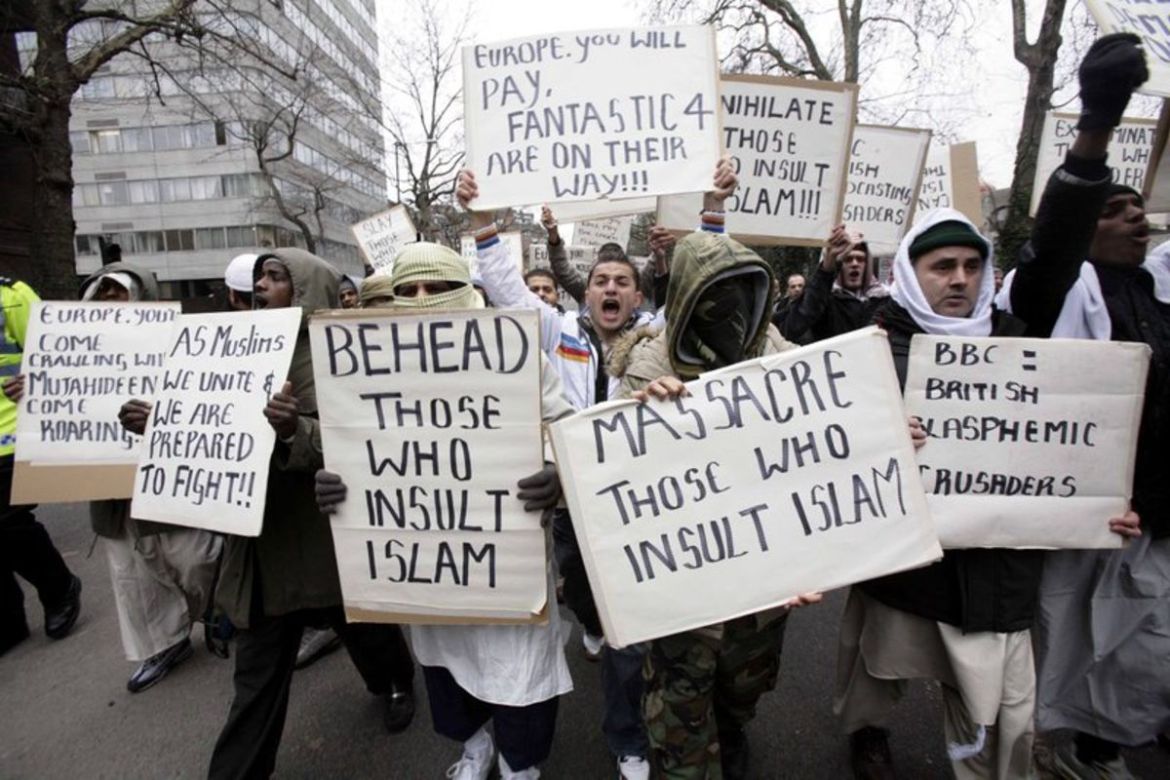 Is Islam the religion of death? Watch below:

Regrettably, it is not. Islam has been a religion for around 1400 years, and throughout that 1400 years it has been constant fighting. Islam has been fighting for a long time to have control over the world. Much of the Muslim religion has happened through force. Islamic “extremists” specifically hates western culture.

How much of the Quran promotes violence?

Presently, there are over 100 verses in the Quran that promote war on nonbelievers. It is actually believed that many of the current “extremist” Muslim’s are just following the message of Muhammad to the letter. Moderate Muslim’s are often viewed as bad Muslim’s. There are hundreds of millions of moderates that share the same dangers as people in western civilization.

Where are some of the bad verses in the Quran?

Allah’s Apostle said, “The Hour will not be established until you fight with the Jews, and the stone behind which a Jew will be hiding will say. “O Muslim! There is a Jew hiding behind me, so kill him.”

The Prophet… was asked whether it was permissible to attack the pagan warriors at night with the probability of exposing their women and children to danger. The Prophet replied, “They (i.e. women and children) are from them (i.e. pagans).” In this command, Muhammad establishes that it is permissible to kill non-combatants in the process of killing a perceived enemy. This provides justification for the many Islamic terror bombings.

The Prophet said, ‘He who fights that Allah’s Word (Islam) should be superior, fights in Allah’s Cause. Muhammad’s words are the basis for offensive Jihad – spreading Islam by force. This is how it was understood by his companions, and by the terrorists of today. (See also Sahih Bukhari 3:125)

A man came to Allah’s Apostle and said, “Instruct me as to such a deed as equals Jihad (in reward).” He replied, “I do not find such a deed.”

The Prophet said, Three things are the roots of faith: to refrain from (killing) a person who utters, “There is no god but Allah” and not to declare him unbeliever whatever sin he commits, and not to excommunicate him from Islam for his any action; and jihad will be performed continuously since the day Allah sent me as a prophet…

The Prophet said: Striving in the path of Allah (jihad) is incumbent on you along with every ruler, whether he is pious or impious

Allah’s Apostle said, “I have been ordered to fight the people till they say: ‘None has the right to be worshipped but Allah’. And if they say so, pray like our prayers, face our Qibla and slaughter as we slaughter, then their blood and property will be sacred to us and we will not interfere with them except legally.”

“The Messenger of Allah said: I have been commanded to fight against people so long as they do not declare that there is no god but Allah.”

“Allah’s Apostle said, ‘Know that Paradise is under the shades of swords’.”

[Muhammad said:] “I decided to order a man to lead the prayer and then take a flame to burn all those, who had not left their houses for the prayer, burning them alive inside their homes.”

“Abu Dharr reported: I said: Messenger of Allah, which of the deeds is the best? He (the Holy Prophet) replied: Belief in Allah and Jihad in His cause…”

“the Messenger of Allah (may peace be upon him) said: ‘One who died but did not fight in the way of Allah nor did he express any desire (or determination) for Jihad died the death of a hypocrite.'”

Three separate hadith in which Muhammad shrugs over the news that innocent children were killed in a raid by his men against unbelievers. His response: “They are of them (meaning the enemy).”

“Fight against those who disbelieve in Allah. Make a holy war… When you meet your enemies who are polytheists, invite them to three courses of action. If they respond to any one of these, you also accept it and withhold yourself from doing them any harm. Invite them to (accept) Islam; if they respond to you, accept it from them and desist from fighting against them… they refuse to accept Islam, demand from them the Jizya. When they agree to pay, accept it from them and hold off your hands. If they refuse to pay the tax, seek Allah’s help and fight them.”

Sahih Muslim (31:5917) – “Ali went a bit and then halted and did not look about and then said in a loud voice: ‘Allah’s Messenger, on what issue should I fight with the people?’ Thereupon he (the Prophet) said: ‘Fight with them until they bear testimony to the fact that there is no god but Allah and Muhammad is his Messenger’.” The pretext for attacking the peaceful farming community of Khaibar was not obvious to the Muslims. Muhammad’s son-in-law Ali asked the prophet of Islam to clarify the reason for their mission to kill, loot and enslave. Muhammad’s reply was straightforward. The people should be fought because they are not Muslim.

Sahih Muslim (31:5918) – “I will fight them until they are like us.” Ali’s reply to Muhammad, after receiving clarification that the pretext for attack Khaibar was to convert the people (see above verse).

Sahih Bukhari 2:35 “The person who participates in (Holy Battles) in Allah’s cause and nothing compels him do so except belief in Allah and His Apostle, will be recompensed by Allah either with a reward, or booty ( if he survives) or will be admitted to Paradise ( if he is killed).”

Sunan an-Nasa’i (Sahih) “Whoever dies without having fought or thought of fighting, he dies on one of the branches of hypocrisy”

Whenever, you are told not to be fearful of Muslims. Remind them of the fact that Islam has been at war since its inception. They have wished harm on western civilization for an extreme amount of time. This need for constant “tolerance” is putting lives at risk. And, unlike the Mayor of London I do not believe that citizens should remain fearful for the sake of being tolerant. From here on, we need to demand to be put first. Any other way, is unacceptable. Finally, I wish to see a country without terror attacks. But, with the way Democrat’s are looking there could be a war on our soil and they’d accept it in the name of “tolerance”.