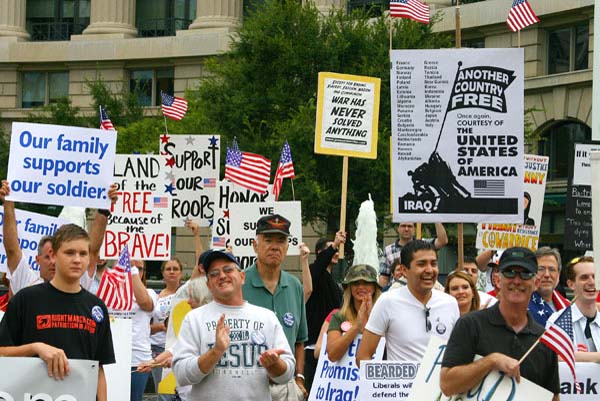 Want to know what is going on with America right now, amidst all the nonsense and the Destroy Trump media noise? Here it is, plain and simple:

The Democratic party died with JFK. The new anti-American, identity-politics driven, no-message, welfare state Democrats have rooted minorities in poverty with empty promises and hate politics, promising them the world for their votes, but delivering nothing but high tax (theft) policies, and gun control laws that make their areas some of the least secure in the country (numbers don’t lie).

The new anti-American Democrats won’t give up their chokehold on minority voters without a nasty fight, which is what we see now. President Trump is winning with results over emotions.

Black unemployment is at record lows, down from 7.9 to 6.8 percent in a year. 23 percent of black males support Trump versus 13 percent during the 2016 elections. Black women support him at 11 percent compared to last year’s 4 percent. Jobs, raises and bonuses are pouring into the economy at unprecedented rates. The stock market has hit a record number of record highs under President Trump.

And what do the Democrats have? Race. Gender. Things you were born with and cannot change or control. Divisive rhetoric. FEELINGS.


Trump is winning, because results and facts Trump divisive feelings. Period. He will win again in 2020, because facts will still Trump feelings then too.

But, we MUST get the vote out, and even more than before. We cannot succumb to the hate politics drumbeat that is echoed by the media puppets who are cherry picked and put in place by the leftist elite to deliver propaganda and divide the public.

Therein lies the hijacking. We the American people have been asleep at the wheel for over 40 years. We have allowed the anti-American radical left to take control of academia, the media, and the judiciary system. This has led to systematic indoctrination of our youth and 3 generations have now been processed though the liberal academia and university indoctrination agendas. These generations grow up exposed to MSM lies and liberal propaganda on the news at a rate of about 9 to 1, with only a select few channels offering fair, balanced coverage of the facts. Most importantly, with the exception of Fox News, there are ZERO popular conservative-leaning networks to counter the liberal narrative and deliver the facts to the people.

SEE ALSO:  THE GUN CONTROL MYTH: Why Gun Control Will Not Help, And Will Actually Make Things Worse

When you hear a lie 1000 times, based on false talking points delivered to Fake News puppets planted by the Deep State as props to deceive the public, the lie becomes the truth, especially if the individual is brainwashed and not exposed to both sides of the story.

During President Trump’s term, there must be significant changes leading to a rise in conservative educators, judges, and media personnel that flood the market and offer balance to the people. But, since the leftist networks will not hire conservatives, there also, most importantly, needs to be a much larger presence of conservative investors in mainstream media networks, in order to increase the public’s exposure to the truth.

President Trump is doing more than enough to wake up Americans for now, but he will not be around forever. We need great change in academia, the media, and the judiciary system to ensure that America remains a truly great nation, and doesn’t fall victim to the hijacking of the radical left.

SHE HELPED: Victim Tells of How Oprah was the Gateway to Weinstein’s Sexual Assaults
DISGUSTING: With Over 15 MILLION Starving American Children, the Democrats Are Fighting for THIS… One MEME Tells All…