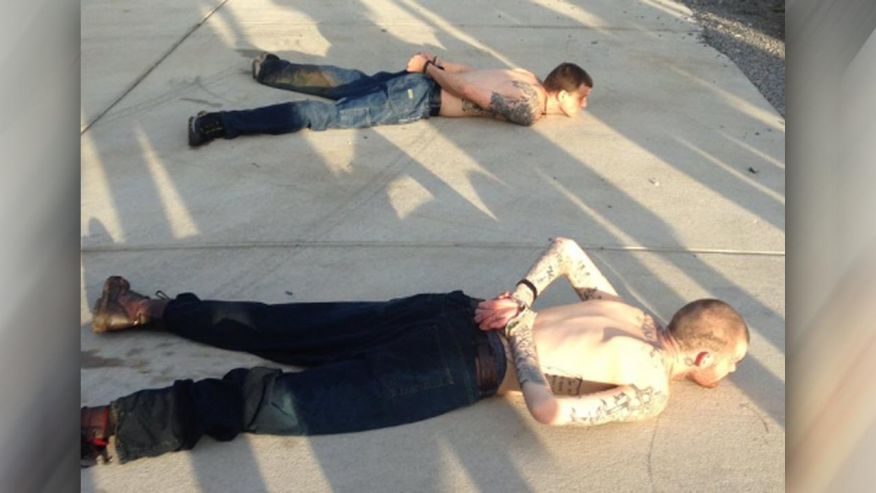 There is a hero in Tennessee, ladies and gentlemen!

One Tennessee homeowner held the two escaped oxygen thieves at gunpoint and alerted authorities, keeping the men captured until they arrived. What an act of bravery!

Thank God for the Second Amendment, or the savages would probably still be out there, terrorizing communities as they ran from authorities.

A Tennessee homeowner held two escaped inmates wanted in the killing of two prison guards at gunpoint Thursday until authorities arrived and made the arrests.

Miller says the escaped Georgia inmates had crashed a car while being chased by law enforcement and fled on foot into woods along Interstate 24 near the rural community of Christiana.

Miller says something alerted the homeowner that people were outside his home and he saw the men trying to steal his vehicle. The trooper says the homeowner held the two at gunpoint with a neighbor he called until the Rutherford County Sheriff’s Department could get there to arrest them.

Rowe and Dubose are accused of killing two guards on a prison transfer bus early Tuesday. Authorities had offered a $130,000 reward for information leading to their arrests.

Watch this amazing video below:


Fortunately these two criminals were in Tennessee. If they were in New York, Massachusetts or California the homeowners wouldn’t have guns.

A liberal would have given them his car keys and crapped in his pants.

The tattooed thugs made a right turn into the wrong neighborhood.  If they turned left they would still be on the run.

Now watch Rachel Madcow and others in the left stream media complain because the guys were caught by a true American patriot who had the wherewithal to have the guts and a gun to stop these two disgusting losers!

And to think you have Hollywood celebrities (morons) and other prominent figures immediately blaming the VA shooting on gun control, and this happens the VERY NEXT DAY. I’m sure we will hear nothing but crickets from them on this story.

SHARE THIS EVERYWHERE IF YOU AGREE THAT, HAD IT NOT BEEN FOR THE SECOND AMENDMENT, THE THUGS WOULD STILL BE LOOSE!