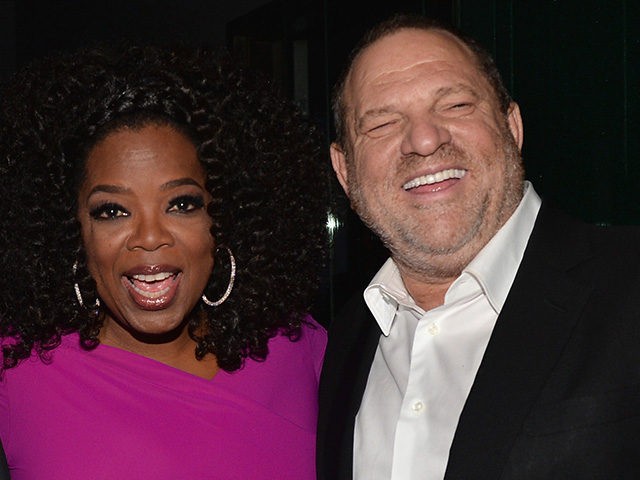 Not only did she know, but one of Hollywood sex predator Harvey Weinstein’s victims claims she helped.

After hearing about all of the scandals rocking Hollywood, then seeing the photos of Oprah straddling and schmoozing with Weinstein, and now hearing this, I would never trust Oprah. Period.

Not only did her Golden Globes speech highlight the fact that she is a recycled celebrity version of Barack Obama, but the fact is that she got rich over promising the poor handouts and gifts, as well as by taking advantage of racism. Think of her as the Hollywood, protected female version of Al Sharpton. Much more cunning and subtle than Al, but equally as effective, she climbed the ladder of fame by taking advantage of what divides the country.

Not only would I not trust Oprah, but I certainly would NEVER vote for her to become President of the United States, as I simply don’t believe that she would have our best interests at heart. She’s clearly in bed with the Obamas, and now we know that she has been a key player in enabling Weinstein and the very Hollywood culture she claims to despise in her speech.


According to the Conservative Tribune:

The left seems to have found their new hero: Oprah Winfrey.

Ever since the media mogul gave a speech at the Golden Globes promising a new era of feminism, liberals have been abuzz with the prospect of an Oprah presidential run — and they have held up the billionaire as some sort of savior from the sexual assault scandals that have plagued Hollywood.

There’s just one major problem: It looks like Winfrey is far from blameless. Countless photos show the talk show host partying and schmoozing with Harvey Weinstein, and it looks all but impossible that she didn’t know the disgraced producer preyed on young actresses for years.

Now, one of those actresses is speaking out, but she’s not just calling out Weinstein. A U.K. actress named Kadian Noble claims that sexual predator Harvey Weinstein actually used his association with Winfrey to get her into a hotel room… and Oprah seemed to have no problem going along with the pervert’s games.

“British actress Kadian Noble said Tuesday she was head-over-heels impressed when she first met Weinstein at an event in London because he was hanging out with model [Naomi] Campbell and had megastar Oprah ‘swinging off his arm,’” reported The New York Post’s Page Six.

“I thought, obviously, this man has something amazing in store for me,” Noble recalled while fighting back tears during a recent press conference.

“Instead, Weinstein used promises of career advancement to lure the actress to his hotel room in Cannes, France, where he forced himself on her,” Page Six explained.

Noble is now suing Weinstein for allegedly “grooming” her for his sexual assaults, while promising career advancement in return.

“Kadian claims that Weinstein then called an unnamed Weinstein Company producer in the US, who told Kadian ‘that she needed to be ‘a good girl and do whatever he wished,’ and if she did, then ‘they would work’ with her further,” Page Six reported.

The lawsuit names a specific sexual assault that supposedly took place in a French hotel room. Perhaps the most damaging, however, is the assertion that insiders around Weinstein were very aware of the repeated sexual assaults, but did nothing.

“Kadian also is suing Weinstein’s brother, Bob, and their company The Weinstein Company, claiming that they were aware that Harvey had a reputation for forcing or coercing ‘aspiring young actresses’ to engage in sexual activity,” The Post stated.

Other celebrities have already admitted to knowing what was going on, but staying silent. Jane Fonda, Brad Pitt, and Seth MacFarlane have all indicated that they were aware of Weinstein’s assaults on women.

Of course she knew. And it seems that she helped. But, if she didn’t, she was fooled by a sex predator, making her too unintelligent to be President.

DEAR OPRAH: PLEASE Run for President in 2020. We Need to Secure a Second Trump Term.
HIJACKED: Americans Have Been Asleep at the Wheel for Over 40 Years… What MUST Be Done to Save the Nation