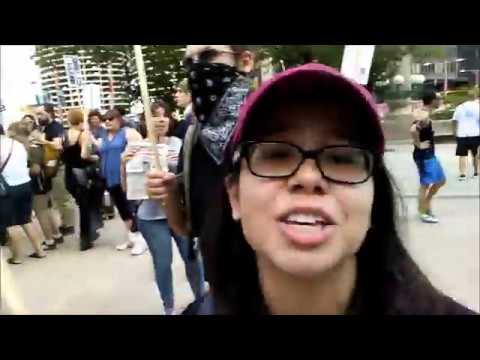 This is mind-boggling, folks.

A privileged sheltered Social Justice Warrior was boasting during a rally that she was excited to wear a t-shirt with the word “FEMINIST” on it while visiting Saudi Arabia.

If she is serious about this, I don’t know what to say. These foolish girls are a product of the MSM brainwashing, and bound to get hurt like the young woman who tried to hitch-hike in the Middle-east to prove that Islam respected women, was gang-raped and murdered.

At least she’s going to a country where women are actually oppressed, which isn’t the case in America. Give her credit for that much.

Watch this video below of the encounter:


Correction: I finished watching the video and I take it back. She has no clue and plans to wear a burka out of respect and thinks it isn’t a symbol of oppression.

I just don’t get it. New age feminists like this woman are against patriarchy, but will jump in bed with a religion that subjugates women.

I hope she does go there. I’ve spent time there, and I can guarantee, if she behaves like this, she will go to jail. Saudi Arabia doesn’t have a tourist business, and it’s very difficult to get a visa. If she does get in, she’s in for a culture shock and a rude awakening.

It is a really bad idea to go to totalitarian countries and aggravate the government, just ask Otto Warmbier.

Once on the streets of Saudi Arabia wearing that shirt and talking like she is now, she’ll be caned and imprisoned.

How did our kids get this culturally unformed? They’re literally brainwashed.

SEE ALSO:  Watch: New Law Means They Can TAKE YOUR GUNS - And There's Nothing You Can Do About IT!

Let her do it, she has the right to wear what ever she wants. And then she’ll have the right to get whipped and thrown in jail by the Saudi government and she can rot in their prison for her beliefs. But sadly she won’t be known as a martyr because feminist news will keep the story buried, cause it won’t fit their agenda.

Share this if you would buy her a one-way ticket to Saudi Arabia!