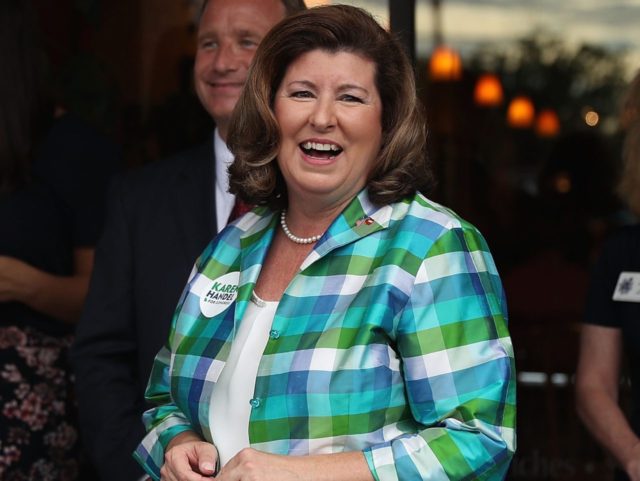 Praying for a win.

Karen Handel is the Republican candidate running for a seat in Congress against the leftist Democrat Jon Ossoff.

Karen’s opponent is being funded by the California liberals. He’s young, and they can control him. We know their agenda well. Get out and vote for Karen Handel in GA!

“There has definitely been a significant bias from the local media like nothing like I have ever experienced,” she told Breitbart News in a telephone interview. “But I intend to have the last laugh when I win tomorrow.”

Handel, a former Georgia Secretary of State, is currently running neck-and-neck with Democrat Jon Ossoff in the race to replace Dr. Tom Price, who was appointed by President Donald Trump as Secretary of Health and Human Services earlier this year.

Ossoff is a newcomer to politics who actually lives outside the district, but who has energized Democratic activists and donors nationwide in the primary race in April by shaping his campaign as a referendum on the Trump administration.

Republicans in the district told Breitbart News during a visit Sunday that they were cautiously optimistic, despite poll numbers showing a dead heat or Ossoff with a small but significant lead.

Handel shared their optimism: “I feel great about things — early voting numbers that we’ve seen look very positive for me, and Republicans tend to be strong on Election Day,” she said.

The people of Georgia either stand with a Democrat inciting murder of Republicans or they stand with Karen & America.


SEE ALSO:  HERO IN TENNESSE: GUN Owner CAPTURED Escaped GA Inmates at GUNPOINT, Held Them Until Arrests Were Made, Thanks to the SECOND AMENDMENT!

And liberals, on the other hand, hate America and all it stands for. They do everything in their power to sell America out to the globalist UN and to destroy all our American traditions and institutions and culture.

Let’s Make America Great Again! Get out and vote!