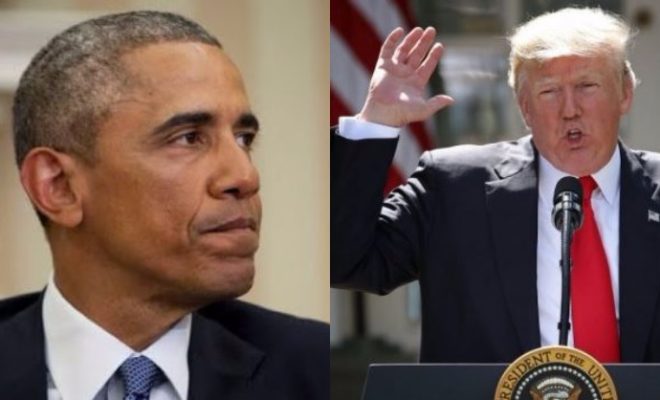 This is a major development in the Clinton and DNC scandal involving funding the baseless Trump dossier.

A special counsel is in order for Fusion GPS and the DNC, don’t you think?

President Trump weighed in on the news in a tweet early Monday:

President Trump tweeted early Monday about reports that the Obama campaign and the Democratic National Committee paid hundreds of thousands of dollars to the firm behind the salacious anti-Trump dossier.

The president was referring to a report by The Federalist on Sunday which alleged that former President Obama’s official campaign organization directed nearly one million dollars to Perkins Coie–the same law firm that sent money to Fusion GPS for the research leading to the now-infamous dossier.

According to records filed with the Federal Election Commission, Obama for America paid Perkins Coie more than $972,000 after April of 2016. The first round of payments were classified as “Legal Services” and were made in April 2016, totaling $98,047. A second batch of payments, also classified as “Legal Services,” were sent to the firm in September 2016, totaling nearly $700,000. The Obama for America organization also sent payments totaling $174,725 through August 2017, according to the report.

The report comes after a week of new information surrounding the dossier. On Friday, the Washington Examiner reported that Fusion GPS was initially hired by the conservative Washington Free Beacon website to conduct opposition research into then-candidate Donald Trump and other GOP contenders for the White House. Lawyers for the Free Beacon told the House Intelligence Committee that the website funded the research between fall 2015 and spring 2016.

The left will continue with their baseless conquest to try to steal the election until the last day. They will never stop. The depth of corruption within the last three democratic presidential regimes is unthinkable.

The word Swamp is a compliment to these Dems.

The Democrats are going to need at least 3-4 million more illegal voters in their next election if they keep this behavior up.

And, above all, an investigation needs to happen, led by Congressman Trey Gowdy and a special counsel, and criminals need to be locked up.

Scandal after scandal plagues the Obama anti-American administration, and he himself was the one that said his term was ‘scandal-free.’

These are a bunch of elitist liars, crooks and criminals who stole America’s uranium and national security secrets, then proceeded to COLLUDE with foreign Governments like Russia and Iran to undermine America and its people.