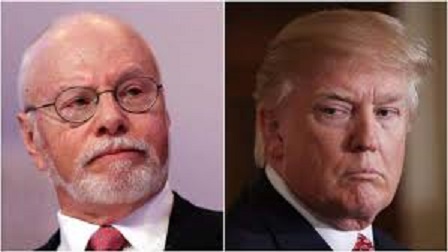 We knew there were some RINOs and even a conservative billionaire investor or two in the mix of this scandal, but this?

In case you missed it, the latest revelations in the Clinton/Russia Scandal, otherwise known as the Real Russia Story, revealed that the Clintons, through their corrupt foundation, and with the help of at least one conservative group/entity, funded the fake anti-Trump Russia dossier.

Well, we have just learned through multiple news outlets, including Fox News, that the conservative website known as the ‘Washington Free Beacon,’ which is backed by billionaire Paul Singer, initially funded the controversial dossier and worked with the left-leaning group Fusion GPS to complete the research.

Despicable. Thank God for the American people who elected President and allowed for all of these psychos to be outed and revealed. President Trump is doing a tremendous job at exposing the radical and crazy voices in American politics, and isolating them in their corners where they belong.


According to Fox News:

The opposition research project that ultimately produced the controversial Trump-Russia dossier was initially backed by the conservative Washington Free Beacon website, it was revealed late Friday.

Free Beacon editor-in-chief Matthew Continetti and and chairman Michael Goldfarb said in a statement that the publication had retained Fusion GPS to “provide research on multiple candidates in the [2016] Republican presidential primary,” as well as Democratic frontrunner Hillary Clinton.

Continetti and Goldfarb denied that the Free Beacon “had contact with, knowledge of, or provided payment for any work performed by Christopher Steele,” the former British spy who compiled the now-infamous file. The dossier, which was published by BuzzFeed in January, contained unverified and lurid allegations about dirt the Russians had on then-candidate Donald Trump and his campaign’s possible connections to Moscow.

Free Beacon’s connection with Fusion GPS was first reported by the Washington Examiner. According to the Examiner’s report, lawyers for the Free Beacon told the House Intelligence Committee that the website funded the research between the fall of 2015 and the spring of 2016.

At some point after that, Fusion GPS was retained by Mark Elias, an attorney representing the Democratic National Committee and the Clinton campaign. Fusion GPS hired Steele after the Free Beacon left the project.

Committee spokesman Jack Langer told Fox News that the Free Beacon “has issued a statement asserting that it had no involvement with Christopher Steele or the dossier he compiled from Russian sources. The Beacon has agreed to cooperate with the House Intelligence Committee to help the Committee verify this assertion.”

Earlier this week, the Washington Post reported that the Clinton campaign and the DNC paid more than $9 million to Elias’ firm, Perkins Coie, which, in turn, retained the political consultants who commissioned the research.

But it’s unclear how much of that $9 million went toward the dossier. And it’s unclear who exactly at the Clinton campaign and DNC might have known how it was being spent.

In their statement, Continetti and Goldfarb denied having any knowledge “of the relationship between Fusion GPS and the Democratic National Committee, Perkins Coie, and the Clinton campaign.”

“We stand by our reporting, and we do not apologize for our methods,” they added. “We consider it our duty to report verifiable information, not falsehoods or slander, and we believe that commitment has been well demonstrated by the quality of the journalism that we produce.”

The Washington Free Beacon was initially founded as a project of the conservative nonprofit group Center for American Freedom, as an alternative to liberal news sites run by progressive nonprofits.

The Center for American Freedom was organized as a 501(c)4 and did not reveal its donors, but a person close to Goldfarb said Singer was an early backer of the project. Later, the Free Beacon was spun-off into a for-profit website.

Singer has been a major player in Republican politics in recent years and maintains ties to Florida Sen. Marco Rubio and several powerful Republicans, including House Speaker Paul Ryan.
A representative to Singer did not immediately respond to a request for comment.

Singer was backing Rubio’s presidential bid at the time of the Free Beacon’s involvement. Rubio’s team insisted this week that they had no knowledge of the dossier. Singer’s close associate Dan Senor also served as Speaker Ryan’s chief adviser during the 2012 president campaign.

It seems that the establishment RINOs may even be more dangerous than the leftists.

After all, the enemy you don’t know is much more dangerous than the one you can identify.

We definitely have a minority of Republican swamp-dwellers who are working with the Democrats on their anti-American agenda.

Share this to expose the facts, and stay tuned for more as this story continues to develop. People need to go to jail.