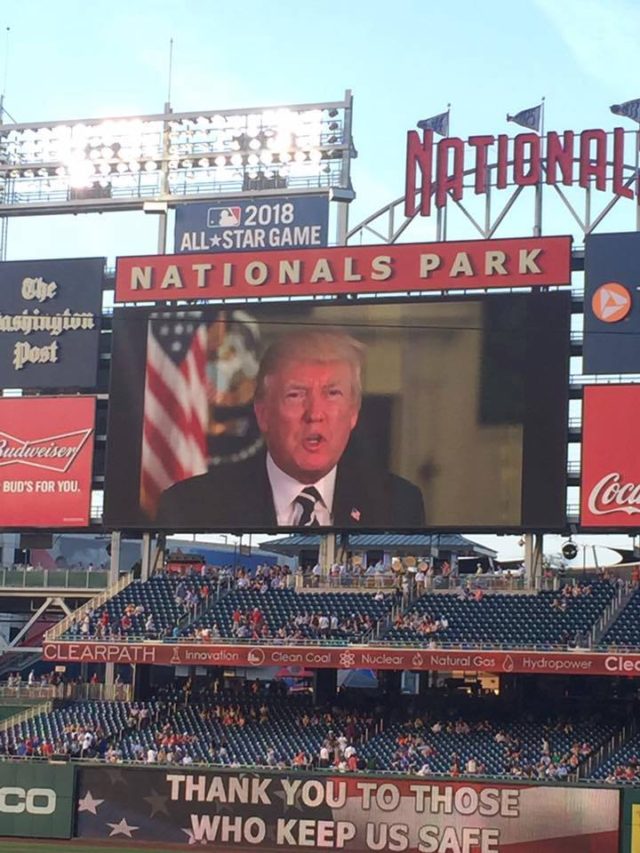 Assuming the Democrats are pro-America is quite a 7th inning stretch.

Liberal Democratic staffers were booing and heckling President Donald Trump during his speech at the Annual Congressional Baseball Game. This should be the epitome of unity, especially on the heels of the shooting in Virginia, but the President was met with boos and jeers from the intolerant left.

Thursday night’s Congressional Baseball Game was hailed as the ultimate sign of bipartisan unity, but dozens of Democrat staffers reportedly cursed, booed, and jeered when President Donald Trump appeared on the video screen at Nationals Park to deliver a message of unity.

According to a Washington Times report, the “staffers erupted into boos, jeers and even vulgar gesticulations” while Trump was saying, “you are showing the world we will not be intimidated by threats.” One person reportedly “shouted an expletive” at Trump while others even mocked the teams when they gathered near second base in prayer.

“As you all know tonight’s game has taken on a much deeper level of meaning, beyond anything that we would have thought,” Trump said in the video. “By playing tonight, you are showing the world that we will not be intimidated by threats, acts of violence, or assaults on our democracy.”

After House Majority Whip Steve Scalise (R-LA) was shot Wednesday morning while practicing for the game with his fellow Republican teammates, leaders of both parties called for unity and civility.

They hate America, because it’s part of the mantra.

Liberals hate the manifestation of “America” (both good and bad), above all, they need to be liked, liked in the eyes of the rest of the world who, ironically wish to move here because of how great America is (after they’re done whining about it).


Further proof that you cannot work with, or reason with the left. They are nothing more than petulant children.