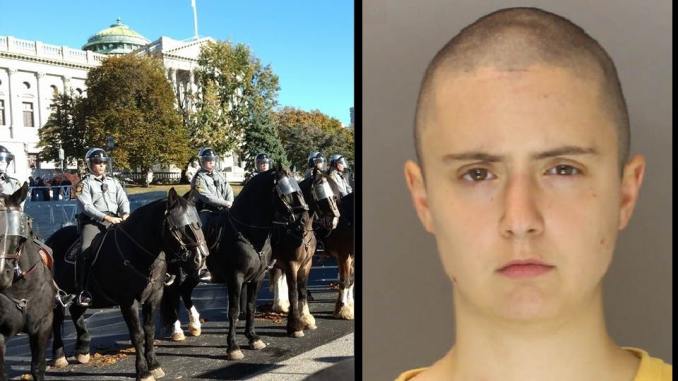 This is getting seriously disgusting and out of hand, folks.

The protest against sharia law that was from last Saturday at 29 U.S Cities was protest for human rights.
And of course liberals will paint and label this March as hateful, Nazi and white supremacist.

An AntiFa thug has stabbed a police horse with a flag pole at this week’s RESIST event in Harrisburg, Pennsylvania.

Harrisburg police say Lisa Simon struck the horse with a flag pole Saturday during the Act for America (anti-America) rally.

Groups like Antifa are paid thugs funded by Soros-backed coffers to pit people against people. This, they hope, will eventually lead to stiff laws that will restrict and control all of us. That is their agenda: CONTROL.


I would like to see these AntiFa cowards put on a cargo plane and dropped off in Iran or Afghanistan.

According to CSC Media Group:

If there was ever any question as to what kind of domestic terrorists America is facing, it should be answered. All across the nation, AntiFa and other liberal hate groups have been showing up at Conservative events to spread their hate for all things America. They have brought weapons and have used them against Conservatives as well as the police. But now a Harrisburg PA Police Horse gets attacked? Really?

That same day, in Seattle Washington, AntiFa tried to attack Conservatives participating in the same event. The police quickly shut that down. In Portland Oregon, a trans AntiFa member attacked one of our reporters but was promptly put on the ground.

That is all that these people have on the left. Violence! They cannot formulate an argument, so they have to hit people in an attempt to make them “shut up” because they do not like what they have to say. If you ever attend one of these events, I strongly suggest that you bring personal protection with you. You never know what is going to happen.

Watch the video below:

I don’t think they realize what they are fighting for. They do NOT want Sharia Law here, although they blindly support Muslims to spread division. Had Sharia law been implemented, they wouldn’t be doing what they are doing now, or they would most definitely be stoned to death. The LGBT community better seriously think before they speak on this issue, as do they NOT realize that all Islamic law will most definitely have their heads LITERALLY rolling…just saying… Be very careful what you wish for.

As for the incident with this poor horse, she should be charged with attempted murder of a police officer. They should tack on animal cruelty and intentional, willful destruction of police property to the list. Prison for her and the rest of these lowlife scum!

When this is the level of ‘protest’ that is happening… violence, and now violence against animals… the issue of who the Fascists are is loud and clear: it is them…whether they call themselves Anti-Fascists aka AntiFa we know they are the fascists and just want you to believe the people they rally against are the fascists, it is just like what Hilter did. Are we clear? Crystal!

Talk about somebody becoming what they claim to hate, her parents must be ashamed of her.