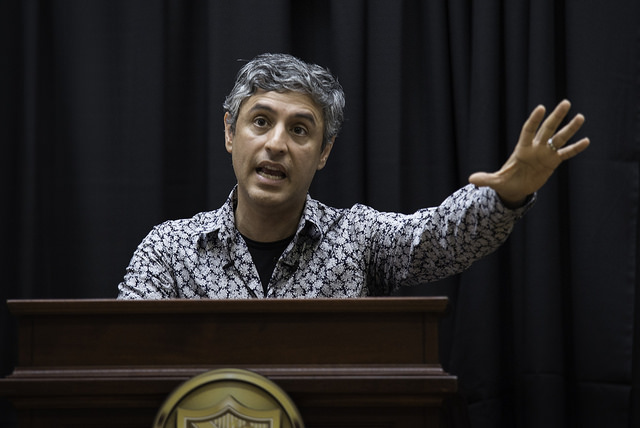 After multiple attacks on President Donald Trump and the first family, CNN has terminated Reza Aslan. He is the host of “Believer”. This comes as the second host this month that CNN has cut ties with, the first being Kathy Griffin.

President Trump promoted his travel ban after the London attacks, which caused Aslan to be furious and tweet vulgar things at Trump. One of these tweets were deleted but read: “This piece of sh– is not just an embarrassment to America and a stain on the presidency. He’s an embarrassment to humankind.”

Who Is Reza Aslan?

Aslan was the host of “Believer with Reza Aslan”. In his show, Aslan meets and interacts with various religious groups from all around the world. He is an Iranian-American, author, and a religious scholar. Here is a brief description of the show:


“Best-selling author and religious scholar Reza Aslan embarks on a spiritual adventure, immersing himself in religious traditions both familiar and downright bizarre to experience life as a true believer. He participates in endurance worship, spellbinding rituals, and unusual rites of passage to learn about rarefied worlds that have been molded by faith and tradition. The goal, Aslan says, is for viewers to recognize that while these traditions may look weird, perhaps even scary, experiencing the practices is the only way to overcome first impressions and break through uneasy feelings.”

“CNN has decided to not move forward with production on the acquired series ‘Believer with Reza Aslan,’” CNN tells Variety,  “We wish Reza and his production team all the best.”

There’s Hatred Within The Tweets

Aslan has been extremely critical of the President. He has also attacked members of the first family. Aslan tweeted at one point that Donald Trump Junior was a “piece of sh– son” identical to his “piece of sh– father”. His tweet has since been deleted.

The words you're looking for are bat, shit, and crazy. https://t.co/X12kN8DW9a

Aslan also attacks other conservatives. In a quoted tweet, he takes aim at Sean Hannity over the highly-promoted conspiracy theory involving the death of Seth Rich:

This piece of shit https://t.co/p8gLeISpo8

“Believer” was released March 5, 2017. There was only one season. After the images of Kathy Griffin holding the President’s severed head came out, she was terminated from CNN as well. We can’t be certain, but it would seem that the constant torment of “fake news” allegations has started media outlets to be more careful- CNN in particular.

Aslan has since issued the following tweet in the last 24 hours in response to CNN, his viewers, and his career:

My statement about the cancellation of #Believer pic.twitter.com/ITtXAyQwd5