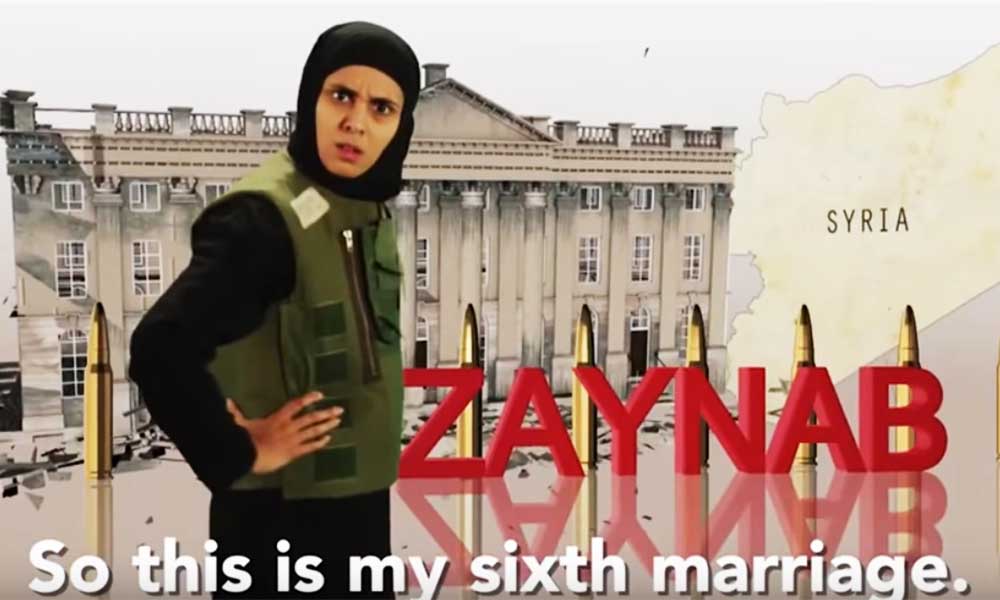 Meet the cast of The Real Housewives of ISIS:

Mel tells us that she met her husband online: “Abdul seduced me online. He had me at ‘free healthcare.’”

Zaynab tells us that she’s been married a few times: “I’ve been widowed five times . . .” Upon hearing an explosion, she adds, “Six times,” with a smile.

Hadiya, scrubbing the floor in her apartment – which has apparently been bombed recently – exclaims, “I’m so glad I’ve moved over here. It’s everything those guys on the chatrooms told me it would be!”  She adds that it is full of surprises.

In true Real Housewives fashion, the ladies come together to do a little fashion show. Two of the brides are wearing the same suicide vest, which inspires snarky remarks from each Jihad Jane. “She looked massive . . .going to need a lot of Semtex to kill that one.” (Even Isis brides pick on each other about weight.)


The BBC has created a controversial sketch called “The Real Housewives of ISIS” as a part of its show Revolting, and the producers have received both praise and criticism for the parody. Proponents cheer the BBC for having the courage to tackle the controversial topic, while critics took to social media to label the sketch as “Islamaphobic” and “racist.”

According to Reuters, thousands of women have traveled to Syria and Iraq to join the Islamic State. “British police said last January 56 women from Britain had gone to Syria and there have been several high profile cases including three schoolgirls who left London in February 2015.” Sharia law demands a certain lifestyle from members of the Islamic state or else. However, it allows for non-Muslim women to be taken into sexual slavery, promotes the rape of females, stoning of gays and women accused of adultery, among other barbaric beliefs.

The writers of the skit, comedians Jolyon Rubinstein and Heydon Prowse, say (you) “have to be fearless or it undermines your credibility. (The reason we’re doing the skit is for) people who are vulnerable to these kind of approaches.”

No, Faraz, I think it puts a spotlight on just what these women go through. They have little to no rights; anyone who has ever seen The Stoning of Soraya M. can attest to that. Women can’t drive, work outside the home, go anywhere without an escort and/or express permission from a male relative.  And those are only a few rules under Sharia law.

I liken it to Swift’s A Modest Proposal – in satire, we see a horrible, desperate truth. Likewise in the ISIS housewives. Toward the end of the skit, one bride says, “Ali got me a new chain yesterday. It’s eight feet long. Almost long enough to get outside, which is great.

Thank you, Rubenstein and Prowse, for shedding light on the horrific lives of these poor women. Even though it appears some of them joined by choice, perhaps some of them feel that sacrificing themselves in a suicide bombing is better than spending life under Sharia law.