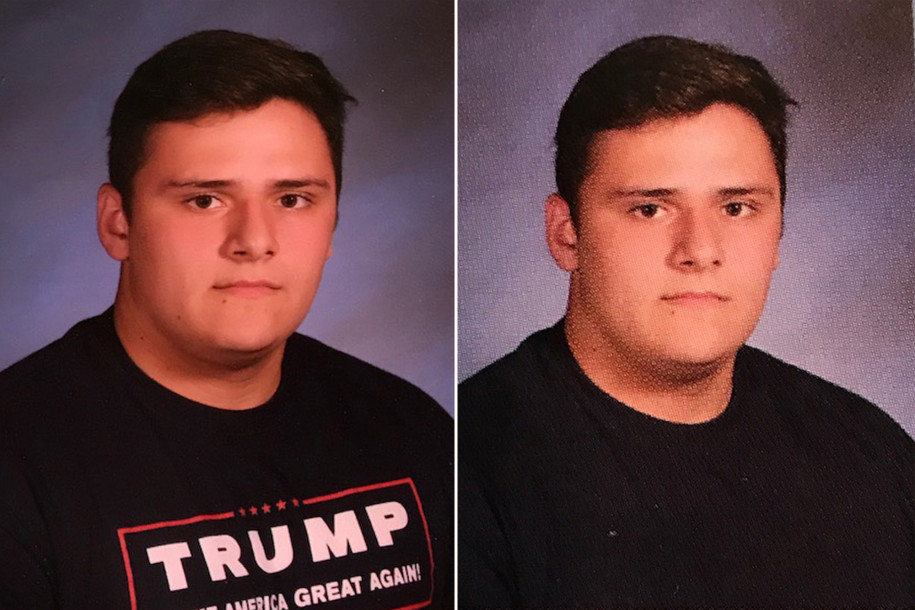 The Wall Township High School in Wall, New Jersey is under fire for their yearbook adviser digitally editing and removing pro-Trump clothing and quotes- a direct violation of your rights in the First Amendment. 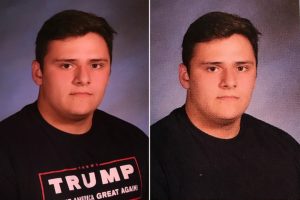 Grant Berardo is a junior at Wall Township High School. He distinctly remembered wearing his shirt with the infamous slogan “TRUMP: Make America Great Again!” on it. To his surprise, he opened his yearbook and found that it had been digitally edited to say nothing. It was just a blank t-shirt now.

Grant’s parents are well aware of the shirt he wore as well. His father, Joseph Berardo, recalls he and his wife talked about the shirt and how they felt. They were both in agreement when he told CNN: “as long as the shirt didn’t have drugs or alcohol on it was fine.” When they found out their son’s First Amendment rights were violated, they were shocked.

Joseph Berardo says the photo proofs came in during the month of November. The proofs still had the logo on their son’s shirt. He said he and his wife both approved of the photo to be used in the yearbook.


They weren’t the only ones. Junior Wyatt Dobrovich-Fago decided to sport a fleece vest in his yearbook photo with the same Trump campaign slogan on the left side of his vest. The same thing happened with his photo: digital editing. 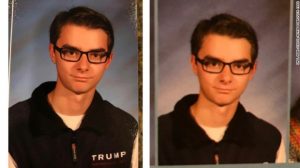 Wyatt also has a sister, Montana Dobrovich-Fago. She happens to be the Freshman Class President. She decided that on the yearbook page announcing who the Class of 2020 officials was she would put a quote by Trump. It is one of his most famous quotes: “I like thinking big. If you are going to be thinking anything, you might as well think big.”

SEE ALSO:  SCAM: Global Warming Hoax Pretty Much Laid to Rest with Latest Data… Al Gore Will NOT Like This!

When Montana had flipped to that page to see her picture and information, the quote from the President was missing. The yearbook adviser had made sure there was nothing even remotely promoting Trump. 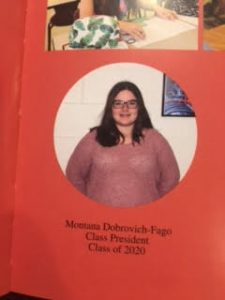 The executive secretary to the superintendent of Wall Township schools, Kim Keator, has said the superintendent, Cheryl Dyer, has suspended the unnamed yearbook adviser. Dyer has since written personal letters to the families of those affected.

Dyer told CNN “We were not aware of it until the books were distributed, we do not condone it, and we working on a remedy to the issue… I cannot discuss personnel matters, but I take this very seriously and it will be addressed appropriately.”

Meanwhile, Joseph Berardo has said he wants new, legitimate yearbooks distributed to the students. He also wants a letter from the school system explaining why they are reissuing these yearbooks. Joseph says “He (his son Grant) was disappointed. This was the first election he has been interested in…”  Joseph also rightfully advocates the importance of teaching the students and teachers the importance of the First Amendment.

For a while, the teacher was nameless and the superintendent nor executive secretary would say the name of the yearbook adviser. The New York Post claims that adviser called and claims to be Susan Parsons. She was immediately suspended, with an ongoing investigation happening. From the looks of it, the superintendent and the school system is in full-swing getting to the bottom of it. Joseph Berardo says they are handling things very well.

Like+Share this post if you support the First Amendment!