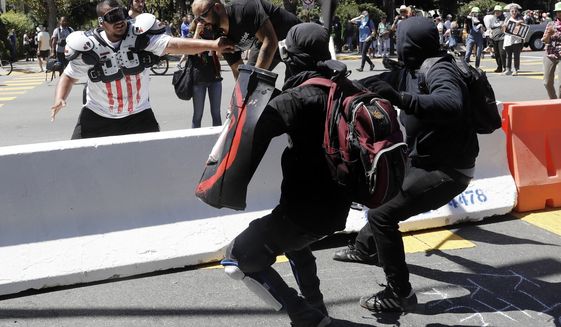 The Washington establishment is sending out clear, strong signals that it might just be ready to abandon the domestic terrorist group known as “Antifa.”

After a wave of public violence, including but not limited to last week’s beating of a Latino father and son who supported President Trump, establishment zombies including Nancy Pelosi herself have come out to condemn the hate group.

Even a broken clock is right twice a day, I guess.

The truth here is that Antifa is nothing but anti-American, outside forces funding domestic terrorism, and the Left knows that no sane American supports them, nor their fake, non-existent causes.


The truth is that Nancy Pelosi and the Leftists, while still eager to push an anti-American agenda, are waking up (better late than never) to the fact that they will become irrelevant immediately should they continue to fail to denounce and condemn Antifa.

They cannot hide from the truth forever.

This statement by Democratic House Minority Leader Nancy Pelosi (D-CA) signals the beginning of the end for Antifa. Or does it?

Pelosi released the statement in the wake of the latest bout of left-wing violence in Berkeley, California, over the weekend. “Antifa” protesters jumped barricades and assaulted peaceful demonstrators at a right-wing event on Sunday.

The events are the latest in a number of violent acts by the left-wing thugs, often seen all clad in black and smashing windows, but many acts have been largely ignored by the mainstream media. Yet since President Trump highlighted the largely unreported left-wing violence aurrounding the events of Charlottesville, Virginia, such acts have slowly been receiving more coverage.

Pelosi had previously called for the House to censure Trump over his response to Charlottesville, but with the increasing rise of left-wing violence, on Tuesday she released a statement condemning the left-wing rioters.

“Our democracy has no room for inciting violence or endangering the public, no matter the ideology of those who commit such acts,” Pelosi said in a statement.  “The violent actions of people calling themselves Antifa in Berkeley this weekend deserve unequivocal condemnation, and the perpetrators should be arrested and prosecuted.”

“In California, as across all of our great nation, we have deep reverence for the Constitutional right to peaceful dissent and free speech,” she said. “Non-violence is fundamental to that right.  Let us use this sad event to reaffirm that we must never fight hate with hate, and to remember the values of peace, openness and justice that represent the best of America.”

Trump had provoked the fury of both Democrats and mainstream media reporters when, despite his condemnations of white nationalists and neo-Nazis, he also condemned the violence on the part of what he described as the “alt-left.”

“Do they have any semblance of guilt? What about the fact that they came charging with clubs in their hands, swinging clubs? Do they have any problem?” he asked. “I think they do.”

Trump was widely criticized for his remarks, with even top Republicans — such as House Speaker Paul Ryan (R-WI) and 2012 presidential nominee Mitt Romney — blasting Trump for his remarks.

“One side is racist, bigoted, Nazi,” Romney tweeted. “The other opposes racism and bigotry. Morally different universes.”

Romney has not tweeted since the violence in California on Sunday.

Calling the group out by name is a HUGE development for a group that refuses to call out evil by name, like Radical Islamic Terrorism, to name a common example.

What do you think of Pelosi’s statement? Is it sincere, and will it lead to the abandonment of the movement by the establishment? Or, is this just a political maneuver?

Let us know, and share this to expose the truth!