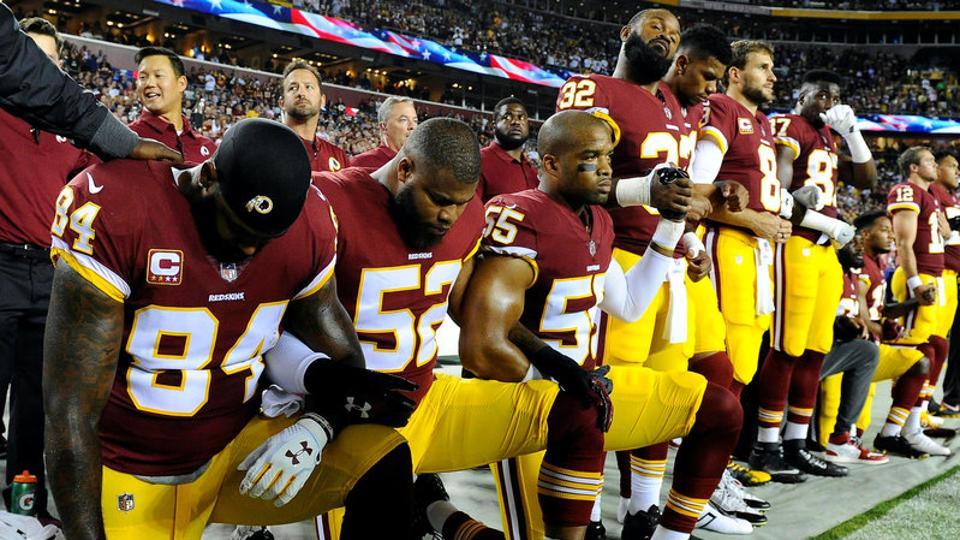 As you already know, many of the NFL’s spineless brats chose to join in on the anti-American protests during the honoring of the country. Players from virtually every team took a knee, or didn’t even show up during the singing of the National Anthem, sparking nationwide outrage.

The NFL has become a platform for Black Lives Matter and Antifa to spread their dividing messages of hate.

Simply put, these entitled, overpaid brats are protesting either because they are paid to do so (directly or indirectly), or because they are otherwise involved with or sympathize with radical anti-American agendas and groups.

That said, it is clear to most that their protests are not only baseless, but invalid.

Here are five of the most invalid, worst arguments driving the hysteria around the NFL.

Wrong. The First Amendment does not normally cover the private workplace, any more than it gives me the right to come into your house and lecture you with my opinions. Moreover, If I chose to take a knee or lecture my coworkers while on the job about my political stances, I’d be fired before I could finish. That said, not one person ever told Colin Kaepernick or anyone else not to march in protest, attend a demonstration, or hold a sign on a sidewalk. Even start an activist group or petition. Choose the right platform. What fans object to is that they are protesting on the clock. They have no right to abuse their platform in that way, and President Trump is correct that NFL owners — if they had any spines — should tell the protesting puppets to take a hike. If you doubt that in any way, I suggest you try a thought experiment: what would happen to a celebrity or famous player who wore a Nazi armband to opening ceremonies? What about their freedom of speech then?


Wrong again. This is the trendy argument among the intellectually idle and permanently pained. Only the always-offended left will use this labeling tactic. But the truth here is that there is nothing racist about challenging the type of conduct that is so radical that it is almost never publicly displayed. Here is proof that this argument holds no weight: the same NFL losers who knelt for The Star-Spangled Banner at Sunday’s game in London stood for God Save the Queen, an anthem under which the British conducted the slave trade, along with colonialism and various other dreadful endeavors during their conquests. To resort to claims of racism is the surest sign that President Trump’s critics are oblivious.

Okay, reality check here. Have you ever played, or even watched, any team sport? Enough said. Big deal. Moving on.

Undoubtedly true — but then ask yourself, and others, where the outrage was when Barack Obama filled out his college hoops brackets on TV annually — or, for that matter, when he debated the qualities of the popular rapper Pitbull on live radio while sitting down for a session with a DJ called “Pimp with a Limp.” The fact here is, unless you’re a Trump supporter who is quite worried that he is using the NFL frenzy to cover for his uncertainty on DACA, this is not a valid objection.

Extremely wrong. Ask Pittsburgh Steelers lineman and ex-Army Ranger Alejandro Villanueva, who served the US during three tours in Afghanistan, about how he found the courage to stand up to his whole team and locker room and walk out onto the football field, hand over heart, to participate in honoring our country by singing the National Anthem. His team lost — deservedly so — but he’ll be a hero, remembered as the true winner of the day — not for simply taking the field, but for his courage and perseverance off it.